LONDON, England (CNN) -- Archaeologists have discovered what they say is the oldest surviving human brain in Britain, dating back at least 2,000 years to the Iron Age. 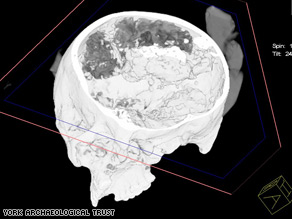 A representation of the skull generated from the CT scans taken at York Hospital.

The remains of the brain were found in a skull unearthed during excavations at York University in northern England, a statement from the university said Friday.

The dig site was described by investigators from York Archaeological Trust as being in an extensive prehistoric farming landscape of fields, track ways and buildings dating back to at least 300 BC.

They believe the skull, which was found on its own in a muddy pit, may have been a ritual offering.

Rachel Cubitt, who was taking part in the dig, described how she felt something move inside the cranium as she cleaned the soil-covered skull's outer surface. Peering through the base of the skull, she spotted an unusual yellow substance.

"It jogged my memory of a university lecture on the rare survival of ancient brain tissue. We gave the skull special conservation treatment as a result, and sought expert medical opinion," she said in a statement on York University's Web site.

A sophisticated CT scanner at York Hospital was then used to produce startlingly clear images of the skull's contents.

Philip Duffey, Consultant Neurologist at the Hospital said: "I'm amazed and excited that scanning has shown structures which appear to be unequivocally of brain origin. I think that it will be very important to establish how these structures have survived, whether there are traces of biological material within them and, if not, what is their composition."

Dr Sonia O'Connor, Research Fellow in Archaeological Sciences at the University of Bradford added: "The survival of brain remains where no other soft tissues are preserved is extremely rare. This brain is particularly exciting because it is very well preserved, even though it is the oldest recorded find of this type in the UK, and one of the earliest worldwide."

According to York University, the find is the second major discovery during archaeological investigations on the site of the University's $745 million campus expansion. Earlier this year, the skeleton of a man believed to be one of Britain's earliest victims of tuberculosis was discovered in a shallow grave. Radiocarbon dating suggests that the man died in the fourth century late-Roman period.