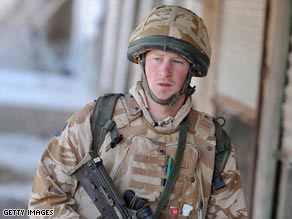 Harry, third in line to the British throne, will now begin a two-and-a-half year course with the Army Air Corps in January 2009, that could result in him seeing active service as a pilot, according to a press statement.

The 24-year-old prince, who has spent time in Afghanistan as a member of the British Army's Household Cavalry, qualified for the course by flying a light aircraft under instruction, the statement said.

"If Prince Harry qualifies as an Army Air Corps pilot, he will, like any officer, be available for operational service wherever the AAC flies," it said.

William's training attracted controversy when he landed Chinook helicopter in a field on the property owned by his girlfriend Kate Middleton's family. Defense officials said the flight had been authorized.

In September, it was announced William is to train to become a full-time search and rescue pilot with the RAF. William and Harry's father, Prince Charles, and uncle, the Duke of York, have also learned to pilot military helicopters.

Prince Harry, who holds the rank of lieutenant, spent three months in Afghanistan earlier this year. He had to be withdrawn in March after his secret deployment was revealed in a media report.