(CNN) -- Belgian police Thursday arrested a woman they called an "al Qaeda living legend" as part of an operation to thwart a terror attack being planned to coincide with an EU summit in Brussels, a Belgian police source told CNN. 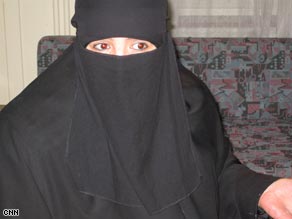 Malika El-Aroud is the widow of one of the men who killed Afghan anti-Taliban leader Ahmad Shah Massoud.

Police seized 14 people, one of whom was planning to carry out a suicide attack in Belgium, the source said. They had contacts at the "highest levels of al Qaeda," the source said.

The police source said officers "had only 24 hours to act."

The leaders of the European Union's 27 member states are meeting in Brussels Thursday and Friday. It is not clear that the heads of state and government themselves were the target of the planned attack.

The federal prosecutor's office in Belgium identified one of the suspects as Malika El-Aroud, the widow of one of the men who assassinated a key opponent of the Taliban in Afghanistan two days before September 11, 2001.

El-Aroud's late husband was one of two men who killed Ahmed Shah Massoud, a leader of the Northern Alliance, in a suicide mission ordered by Osama Bin Laden.

Belgian police aimed to prevent El-Aroud, whom the police source called an "al-Qaeda living legend," from moving to Afghanistan to play a role in the fight against the coalition forces there, the source said.

She is thought to be a recruiter for the anti-Western network, rather than a fighter, the source said.

El-Aroud described the "love" she and her late husband felt for Osama bin Laden in a 2006 interview with CNN.

"Most Muslims love Osama. It was he who helped the oppressed. It was he who stood up against the biggest enemy in the world, the United States. We love him for that," she told CNN then.

Gazing into CNN's cameras she said, "It's the pinnacle in Islam to be the widow of a martyr. For a woman it's extraordinary."

"Most of those arrested" Thursday had Belgian passports, the police source said. All 14 are of Moroccan descent.

Three of the suspects had traveled to the Afghanistan-Pakistan border region to participate in fighting or training camps, and were in contact with an unnamed suspect who had direct links to important al Qaeda figures, police said.

Information showed the suspect who was to carry out the attack had received the green light to execute the operation, police said. Investigators noted the suspect had said goodbye to his family "because he wanted to go to paradise with a clear conscience," police said.

Authorities also found a video meant for the suspect's family, which police said was probably a farewell tape. They did not find any explosives, the police said in a statement.

The 14 suspects were arrested after police carried out 16 search warrants in Brussels and one in the western Belgian city of Liege. During those searches, police seized computer equipment and documents and the 14 people, including the three who traveled to Afghanistan and Pakistan and 11 others suspected of having given them logistical and material support.

Police said their investigation has been under way intensively since the end of 2007.

--CNN's Andrew Carey and Paula Newton contributed to this report.