ATHENS, Greece (CNN) -- The Greek government was struggling to bring violent protests under control Wednesday, five days after they were sparked by the police killing of a teenager. 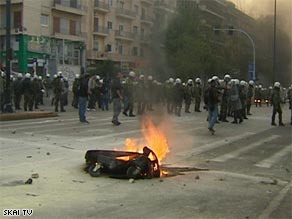 Riot police face protesters in Athens Wednesday as debris burns in the streets.

Athens announced aid for small businesses but demonstrators continued to stage standoffs and riots in the Greek capital, while workers held a long-planned strike in one of the city's main squares.

Greek police confronted protesters outside the parliament building after days of rioting that have brought the city to a standstill and threatened the government's hold on power.

A lawyer for the officers accused of killing the teenager said Wednesday that a ballistics test showed the policeman had not fired directly at the 15-year-old.

The bullet ricocheted off another object before hitting Alexandros Grigoropoulos in the chest, attorney Alex Kougias said.

The family of the boy, who was buried Tuesday, has called in its own investigators to verify state findings, the Athens coroner told CNN.

Watch crowds gather for the funeral »

The shooting happened in a restive Athens neighborhood after six young protesters pelted a police patrol car with stones. Grigoropoulos was shot as he tried to throw a fuel-filled bomb at the officers, police said.

Striking union members condemned what they called "the cold-blooded murder of the young Alexander," as they demanded higher wages, a ban on mass layoffs by companies receiving government assistance, and the doubling of government funding for education, health and welfare programs.

Meanwhile, the mayor of Athens appealed for calm along with help in returning the city to normal, while the government released a statement saying everyone bears responsibility for restoring order.

So far, however, the Greek leadership has appeared unable to quell the violence and there is growing pressure on the government to resign.

Watch how the unrest could cause a crisis »

Saturday's shooting, which sparked the riots, was only one reason for the days of unrest. Many Greeks were already angry over how the government was run, allegations of corruption, the state of the economy and a lack of jobs.

Protesters outside parliament hurled stones and projectiles, some of them on fire, at a line of police dressed in green uniforms, white helmets, and armed with shields. The police occasionally advanced but did not respond.

But the violence then spread to other areas, with students responsible for much of the disorder, according to Achilles Popas, a reporter for Greek station Skai TV. The students hurled petrol bombs and caused a lot of damage in the city center, where shattered glass covered the ground, Popas told CNN.

Police responded by using tear gas, Popas said. They appeared to be trying to keep their distance from the protesters but the clashes continued, he added.

Wednesday's strike went ahead despite a plea from Prime Minister Kostas Karamanlis to hold off amid the violence.

Banks, schools, and hospitals were closed and transportation was at a halt with urban buses and the Athens subway shut. Many local and international flights were canceled.

Karamanlis condemned the "destructive fury and brutal violence" of the protesters.

"The rioters, with their acts, once again, demonstrated that the only thing that inspires them is the destruction," the prime minister said in a statement. "They have targeted social peace, the rule of law, and democracy itself. That is why they are isolated."

Karamanlis said the violence has affected businesses, especially small ones already suffering from the economic downturn. He announced a series of measures to help merchants recover, including reimbursement for losses, direct financial assistance, 15-year loans, and suspended debts.

Athens Mayor Nikita Kaklamani asked all Athens residents to buy something from the shops as a symbolic show of support.

"The city wants a smile, it wants hope. We will provide it, because this must be Athens' fate," the mayor said in a statement. "We will defend its history, its cultural heritage, the fortunes of our fellow citizens and, above all, human lives."

In his statement, Karamanlis said the government was acting responsibly and he called on all political parties to work together.

"The central responsibility of managing a difficult crisis undoubtedly remains with the elected government of a land," Bakogiannis said in a statement issued Wednesday. "However, I would like to stress no one is without responsibility, (including) political parties and institutions. A share of the responsibility for order, the city's economic life, remains with us all."

Opposition leaders have blasted the government amid the unrest. The leader of the left-wing opposition party SYRIZA has called for protesters to topple the government, but Karamanlis ruled out early elections.