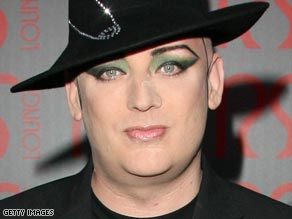 Norwegian Audun Carlsen, 29, said the frontman with the 1980s band beat him with a metal chain as he tried to flee his London flat after a naked photo shoot.

A jury at a London court found on Friday that the case was proven against the 46-year-old musician -- tried under his real name of George O'Dowd.

The singer declined to give evidence during the trial but the jury heard he told police he handcuffed Carlsen to his bed while he investigated alleged tampering with his computer.

Carlsen told the court O'Dowd invented the story about computer tampering so he could punish him for not having sex at a previous meeting. He said: "I think he couldn't handle the refusal -- me not having sex with him."

O'Dowd looked grim as the verdict was delivered, according to the Press Association. The singer was bailed until sentencing on January 16.

Judge David Radford warned him that he was likely to face jail. "The fact that your bail is being continued does not imply that this will be dealt with by a non-custodial sentence. I don't want any false expectations created," he said.