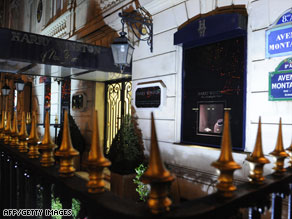 Robbers dressed in drag stole more than $100M worth of jewelry from a Harry Winston store in Paris.

The incident, which lasted about 15 minutes, took place Thursday around 5:30 p.m. at the Harry Winston store near the famed Avenue des Champs-Elysees, around the corner from a police station.

The case has been turned over to the unit in charge of handling organized crime cases, said Isabelle Montagne, assistant to Paris prosecutor Jean Claude Marin.

No shots were fired and no one was wounded, she said.

Watch more on the heist »

After they entered the store, the four thieves pulled out their weapons, forced the customers and employees -- about 15 people in all -- into a corner, and grabbed jewels out of display cases and safes, the prosecutor's office said. The robbers seemed to know the locations of secret hiding places for jewels and called some employees by their first names, it said.

The group then fled the store, which is located on a wide street near subways and other public transportation. French state radio reported that it was not immediately clear how the robbers left the area.

Investigators believe it was the work of a highly professional group, and that the culprits were French or from elsewhere in Europe, state radio reported.

In a written statement, the Harry Winston company said, "We are cooperating with the authorities in their investigation. Our first concern is the well-being of our employees."

The same shop was robbed of millions of euros worth of jewelry just 14 months ago, in October 2007.

-- CNN's Jim Bittermann and Niki Cook contributed to this report.