Beavers back in Britain

(CNN) -- For the first time in 400 years, the beaver has returned to Great Britain. 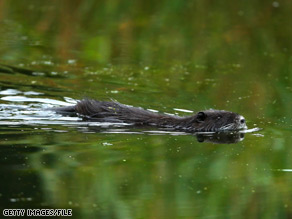 Experts hope the beaver's return to the United Kingdom could lead to more habitat restoration.

Four wild beaver families arrived at London's Heathrow airport Thursday night, the first step in an effort to reintroduce the mammals -- probably hunted to extinction around the reign of King James I, in the 16th or 17th century -- to the British countryside.

The beaver families, which were trapped in Norway after several months of careful observation, will be quarantined for six months before being released in western Scotland.

"This is the latest stage in a truly exciting development for wildlife watchers, not just in Scotland but around the world," said Michael Russell, Britain's minister for environment. "I am sure the beavers are awaiting their release from quarantine... as keenly as I am."

Conservationists and wildlife advocates hope the reintroduction of the beaver will spark a further restoration of natural habitats in the British isles.

"Beavers hold the potential to create new wetland habitats which in turn increases the appeal to other native species," said Simon Jones of the Scottish Beaver Trial, which is overseeing the project. "We are excited to get the trial under way and see what benefits beavers can bring to Scotland."