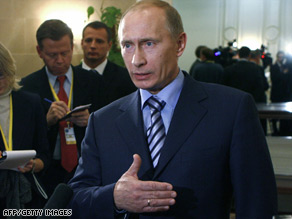 Vladimir Putin was barred constitutionally from seeking a third consecutive term as president.

There is widespread speculation in Russian media that the change is aimed at paving the way for a return to the Kremlin by Prime Minister Vladimir Putin, who remains a popular and powerful figure since leaving the president's office in May.

The Kremlin maintains the amendment -- along with other proposed changes to the terms in office for elected officials -- is necessary to ensure the stability of future Russian governments.

The lower house of the Russian parliament had its third and final reading Friday before putting the measures to a vote. It passed by a vote of 392 to 57, with those against representing the Communist Party faction. There were no abstentions.

Further approval is needed from the upper house of parliament and regional councils before the changes become law. The amendments will come into force when at least two-thirds of the nation's 83 regional parliaments and assemblies -- or 56 -- approve them.

Analysts have expressed concern about the rapid movement of the measures through parliament. They say the government may be seeking to capitalize on Putin's popularity amid the financial crisis, which has dented support for the current leadership.

The next Russian presidential elections are scheduled for 2012.

There is speculation in Russia that the new measures could set the stage for fresh elections, allowing Putin to sidestep a ban on a third presidential term and stand again for president.

-- CNN's Matthew Chance and Max Tkachenko contributed to this report.