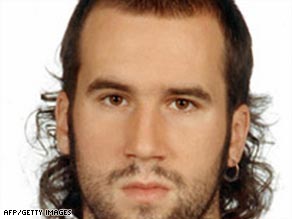 The suspect, Mikel Garikoitz Aspiazu, 35, is wanted in connection with the shooting deaths of two plainclothes Spanish Civil Guards last December -- while they were on an anti-ETA investigation in France. He is thought to have been the ETA commander who trained and sent operatives to carry out attacks.

French anti-terrorism police arrested Aspiazu, alias "Txeroki," at an apartment in the Pyrenees resort village of Cauterets, about 30 kilometers (18 miles) from Lourdes. A woman, not immediately identified, was also detained in the raid with a warrant from French anti-terrorism judge Laurence Le Vert, CNN partner station CNN+ reported.

The arrests occurred at 3:30 a.m. (9:30 p.m. Sunday ET). Aspiazu and the woman were sleeping and armed, and police kept them in the apartment initially during a search of the premises.

"The arrest shows the unfailing determination of the police forces in the battle against any form of terrorism," Alliot-Marie said in a statement. "It also illustrates once again the admirable collaboration between France and Spain in the fight against Basque terrorism."

ETA is blamed for more than 800 deaths in its long fight for Basque independence. It has traditionally used France as its rear-guard base for logistics to carry out attacks, mainly across the border in Spain.

But French and Spanish police have cooperated on a number of arrests of top ETA operatives in France. Last May, French police arrested the suspected leader of ETA's political, or policy-making wing, Francisco Javier Lopez Pena, alias "Thierry."

But even with ETA suspects Aspiazu, on the military side, and Lopez Pena, on the political side, in custody, analysts cautioned that ETA has shown its ability to replace fallen leaders and carry on its fight.

Both Aspiazu and Lopez Pena were considered hardliners who opposed ETA's declaration in March 2006 of a "permanent" unilateral cease-fire, which raised hopes of an end to nearly 40 years of ETA violence.

An ETA bomb at Madrid's airport in December 2006 killed two men and caused heavy damage. Aspiazu is suspected of giving the order for that attack and providing commandos with the explosives, CNN+ reported.

Although the Socialist government immediately ended the fledgling peace process, ETA did not officially end its cease-fire until June 2007.

On October 30, a powerful car bomb that authorities blamed on ETA injured 27 people in broad daylight at the University of Navarra in the northern Spanish city of Pamplona. And last week, French police arrested two ETA suspects, both armed, as they were riding bicycles.

Aspiazu is thought to have become an ETA member in 2000, rising quickly to become head of the commandos in 2004. In addition to the alleged killings of the two undercover Civil Guards, he is wanted for the alleged killing of a judge in November 2001 in the Basque region, CNN+ reported.

There are about 600 ETA convicts or suspects in Spanish jails and 150 others in French jails, authorities in the two countries have told CNN.