LONDON, England (CNN) -- A British couple who married in a lavish Second Life wedding ceremony are to divorce after one of them had an alleged "affair" in the online world. 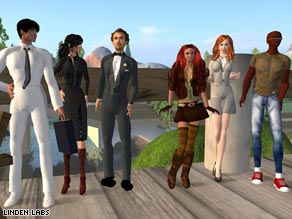 Second Life users can interact and form relationships with other players' avatars.

Amy Taylor, 28, said she had caught husband David Pollard, 40, having sex with an animated woman. The couple, who met in an Internet chatroom in 2003, are now separated.

"I went mad -- I was so hurt. I just couldn't believe what he'd done," Taylor told the Western Morning News. "It may have started online, but it existed entirely in the real world and it hurts just as much now it is over."

Second Life allows users to create alter egos known as "avatars" and interact with other players, forming relationships, holding down jobs and trading products and services for a virtual currency convertible into real life dollars. iReport.com: Share your stories from Second Life

The couple's real-life wedding in 2005 was eclipsed by a fairy tale ceremony held within Second Life.

But Taylor told the Western Morning News she had subsequently hired an online private detective to track his activities: "He never did anything in real life, but I had my suspicions about what he was doing in Second Life." iReport.com: Anger in a virtual world

Pollard admitted having an online relationship with a "girl in America" but denied wrongdoing. "We weren't even having cyber sex or anything like that, we were just chatting and hanging out together," he told the Western Morning News.

Taylor is now in a new relationship with a man she met in the online roleplaying game World of Warcraft.