(CNN) -- A biker who posted videos of himself on YouTube performing stunts and speeding at up to 210 kph (130 mph) has been jailed after inadvertently confessing his misdemeanors to police. 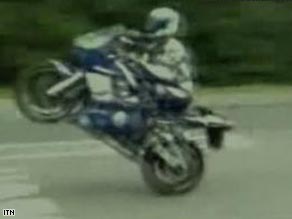 Sandor Ferenci, 28, was approached by police after a motorist saw him speeding on his powerful motorcycle and noted his registration number.

When they called at his house in Oxfordshire, England, he unwittingly asked if they had seen his YouTube video -- prompting officers to search the Internet, where they found uploaded video of his hazardous riding.

Judge Terence Maher told Ferenci that he had carried out "lunatic and grossly irresponsible maneuvers at considerable speed," according to CNN affiliate ITN.

Ferenci's video footage, filmed by a friend from various angles including a footbridge, was shown to the court.

In it the biker is seen performing wheelies, tire-smoking wheelspins and skids on his Yamaha R6 road bike as well as high speed undertaking maneuvers.

Prosecutor Brian Payne said it was impossible to gauge Ferenci's exact speed in the video, but police estimated he was driving up to 210 kph, ITN reported.