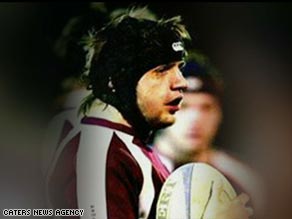 Daniel James, 23, from Sinton Green in western England was paralyzed from the chest down in March 2007 when a rugby scrum collapsed on top of him during match practice, dislocating his spine, the UK's Press Association has reported.

Worcestershire Coroner's Service, which is conducing an inquest into the circumstances of his death, states on its Web site that James died on September 12 after he "traveled to Switzerland with a view to ending his own life. He was admitted to a clinic where he died."

The inquest was adjourned on September 19 for reports.

West Mercia police say that a man and a woman are helping the force with their enquiries. Assisting someone to commit suicide is illegal in the UK, as it is in most other European countries. What do you think of assisted suicide?

James, who played rugby for England under-16s, was a university student at the time of his injury last year. He is believed to be the youngest person from the UK to have traveled to Switzerland to commit suicide.

In a statement Friday, reported by PA, James' parents said that he had attempted to kill himself several times already.

Watch why James opted for suicide »

"His death was an extremely sad loss for his family, friends and all those that care for him but no doubt a welcome relief from the 'prison' he felt his body had become and the day-to-day fear and loathing of his living existence, as a result of which he took his own life.

"This is the last way that the family wanted Dan's life to end but he was, as those who know him are aware, an intelligent, strong-willed and some say determined young man," PA reported James' parents as saying.

"The family suffered considerably over the last few months and do wish to be left in peace to allow them to grieve appropriately."

James' parents added that their son, "an intelligent young man of sound mind," had never come to terms with his condition and was "not prepared to live what he felt was a second-class existence".

Adrian Harling, the family solicitor, would not comment on the investigation, PA reported.

More than 100 people from the UK who have committed suicide in Switzerland have traveled to the Dignitas Clinic in Forch. It is not known if James attended the clinic.

Switzerland, along with Belgium, Luxembourg and the Netherlands, are the only European countries where authorities will not prosecute those who assist with suicide.

All About Switzerland • Suicide