UK: Army to get leader keen on Afghan surge

LONDON, England (CNN) -- A British general who advocates a troop "surge" in Afghanistan will be appointed head of the British Army next year, the Ministry of Defense said Friday. 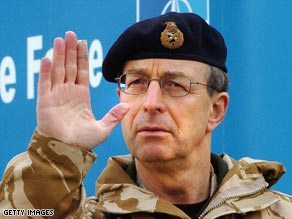 General David Richards is to become the new head of the British Army next year.

Richards, who is responsible for delivering forces to Afghanistan, Iraq, and Kosovo in his current role, was head of NATO forces in Afghanistan between May 2006 and February 2007.

In a June interview with the defense ministry's Defence Focus magazine, Richards called for more troops in order to succeed in Afghanistan.

"Though things have improved, don't think for one minute we can believe that we are 'winning,'" Richards told the magazine.

"We need to define success carefully and continue to look for opportunities to increase troops for the surge effect that the Americans had in Iraq. We need boots on the ground and reconstruction to win their hearts and minds."

Richards told the magazine that the situation in the country had improved since he commanded NATO forces there, in part because troop numbers had doubled.

Britain currently has about 8,000 troops in Afghanistan, the Ministry of Defense said.

Richards also believes that a negotiated settlement may be necessary to end the conflict, but that any talks must take place with the Afghan government and NATO in a position of strength, The Independent reported.

Although Friday's announcement does not mean an early retirement for Dannatt, British news reports Friday said Dannatt may be passed over for the job of head of the UK armed forces when he steps down from his current role.

In July, Dannatt defended himself after reports that he was expected to resign early. In a letter to The Daily Telegraph newspaper, Dannatt said he intended to serve his full term.