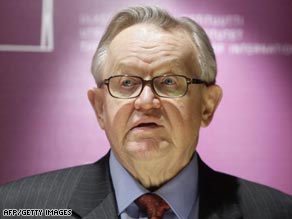 "Through his untiring efforts and good results, he has shown what role mediation of various kinds can play in the resolution of international conflicts."

The committee cited Ahtisaari's "significant" part in establishing Namibia's independence and his "central" role in solving the question of the Indonesian province of Aceh in 2005.

Watch as Finland celebrates the announcement »

Ahtisaari twice worked to find a solution in Kosovo -- first in 1999 and again between 2005 and 2007. He also worked with others this year to find a peaceful solution to the problems in Iraq, the committee said.

Ahtisaari and his group, Crisis Management Initiative, also contributed to resolving other conflicts in Northern Ireland, Central Asia, and the Horn of Africa, the committee said.

"The Norwegian Nobel Committee wishes to express the hope that others may be inspired by his efforts and his achievements," Mjoes said.

The committee awards the peace prize annually according to guidelines laid down in the will of its founder, Alfred Nobel. He specified the prize should go to whoever "shall have done the most or the best work for fraternity between nations, for the abolition or reduction of standing armies and for the holding and promotion of peace congresses."

The committee plans to award the prize to Ahtisaari on December 10 at Oslo City Hall in Norway.

The peace prize is one of five Nobel prizes awarded annually. The others -- for physics, chemistry, physiology or medicine, and literature -- were announced this week and will be awarded in Stockholm, Sweden later this year.