MOSCOW, Russia (CNN) -- A leading critic of Kremlin-backed leaders in the Russian republic of Ingushetia was fatally shot Sunday while being taken to a police precinct by officers, Reporters without Borders said. 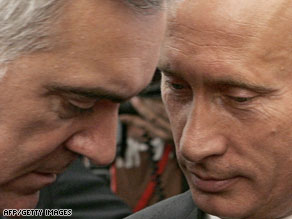 The authorities in the volatile province in southern Russia said Magomed Yevloyev was shot in the head accidentally while resisting arrest, the Paris-based non-governmental organization reported.

Officials have launched a probe, according to the Russian news agency Interfax.

Yevloyev was the owner of Ingushetiya.ru, a Web site that frequently took to task local leaders in Ingushetia, a small Russian republic bordering Chechnya in the North Caucasus, just north of Georgia.

According to The Associated Press, the site's deputy editor Ruslan Khautiyev said that Yevloyev arrived in Ingushetia from Moscow on Sunday on the same plane as regional President Murat Zyazikov. He said the police blocked the jet on the runway after it landed in Ingushetia's provincial capital, Magas, boarded the plane and took Yevloyev off.

Yevloyev was then whisked away in a car and later dumped at the side of a road with a gunshot wound to the head, he said.

An impoverished province with a largely Muslim population, Ingushetiya has suffered for almost a decade from unrest spilling over from neighboring Chechnya.

In response, Russia has launched a counterinsurgency campaign that has been criticized by human rights group for abuses such as arbitrary detentions and extra-judicial executions.

Over the years, Yevloyev had fiercely criticized Zyazikov. Last year, he accused Zyazikov on his Web site of hiring hit-men to kill him, Reporters Without Borders said.

All About Ingushetia • Russia