(CNN) -- Madeleine McCann's parents still believe their missing daughter is alive as files from the Portuguese police probe into her disappearance do not reveal any evidence she has been killed, a family spokesman said Tuesday. 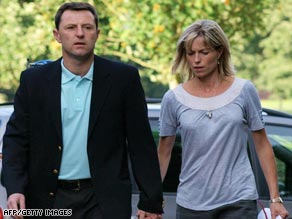 Portuguese authorities released almost 30,000 pages of documents from the 15-month investigation on Monday after lifting the period of judicial secrecy in the case.

The three-year-old child vanished in the Algarve region in May last year after being left in the holiday apartment of Kate and Gerry McCann while her parents were having dinner in a restaurant nearby.

"The longer it goes on, they actually draw strength from that," spokesman Clarence Mitchell told the BBC. "They hope against hope she is being held somewhere."

The McCanns were named as formal suspects by the police last September, and the released files show that the father was told in an interview that his daughter's DNA had been found in the family's Renault Scenic hire car, the UK Press Association reported Tuesday.

Watch a report on the release of the Madaleine files »

The dossier includes an email written by senior British forensic scientist John Lowe to Detective Superintendent Stuart Prior, head of the UK side of the investigation, which said it was impossible to conclude whether a sample from the hire car came from Madeleine.

Mitchell confirmed that the father had been interrogated about Madeleine's DNA which police claimed had been found both in the apartment and the vehicle.

"You have to ask what the police were trying to achieve by over-presenting evidence that they did not have, and clearly could not claim to have," Mitchell told the BBC.

In the files, a friend of Gerry McCann said it seemed clear that the Portuguese police hoped to force a confession from him.

"It would appear they were seeking to apply pressure by overstating the evidence that they had -- and frankly it is a scandal," the friend said.

The McCanns' lawyers were given access to the police files last week, and are now studying them for fresh leads that the couple's private detectives can follow up, PA reported.

The duo have conducted an international campaign seeking help, but have found no reliable evidence despite several reported sightings of their daughter.

The 40-year-olds are no longer considered formal suspects by the Portuguese, who ended their investigations on July 21. The case will only be reopened if new evidence emerges.

Algarve resident Robert Murat -- who was also named as an "arguido" -- has also been cleared.

The files reveal that the prosecutors concluded the McCanns did not "act with intent" in leaving their children alone in the apartment on the night the child went missing.

"They could not predict that in the resort they chose to spend their holidays they could place the life of any of their children in danger," public prosecutors Jose de Magalhaes e Menezes and Joao Melchior Gomes wrote, PA reported.

"The investigators are fully conscious that their work is not exempt from imperfections. They worked with an enormous margin of error and they achieved very little in terms of conclusive results, especially about the fate of the unfortunate child.

"This is not, unfortunately, a detective novel, a crime scenario fit for the investigative efforts of a Sherlock Holmes or Hercule Poirot, guided by the illusion that the forces of law and justice can always re-establish order."

The "e-fits" were created based on eyewitness accounts on May 6, three days after the little girl vanished.