LONDON, England (CNN) -- Britain's Home Office said Wednesday it is banning the military wing of Hezbollah, the Lebanese political movement, because of its support for "terrorism" in Iraq and the Palestinian territories. 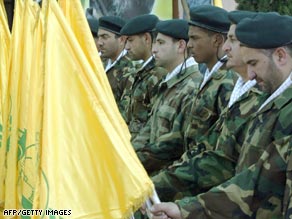 Parliament must approve the order for it to become law.

The announcement would make it a crime to belong to or encourage support for Hezbollah's military wing. The order does not apply to Hezbollah's political or social activities.

"It sends out a clear message that we condemn Hezbollah's violence and support for terrorism," Home Office minister Tony McNulty said in a statement.

Britain's Terrorism Act allows Home Secretary Jacqui Smith to ban any group that she believes is involved in terrorism.

"Hezbollah's military wing is providing active support to militants in Iraq who are responsible for attacks both on coalition forces and on Iraqi civilians, including providing training in the use of deadly roadside bombs," McNulty said.

British Prime Minister Gordon Brown said the ban came after "new evidence" of Hezbollah's involvement in terrorism in Iraq and the Palestinian territories. In the House of Commons, Brown called on Hezbollah to lay down its arms and participate in the Lebanese political process "on the same terms as other political parties."

Hezbollah is the largest Shiite Muslim political movement in Lebanon and maintains an armed force that fought a month-long war with Israel in 2006.

The group has been linked to numerous terrorist attacks against American, Israeli, and other Western targets and the United States lists it as a terrorist organization. But many in Lebanon and other parts of the Middle East, particularly Shiites, view Hezbollah militants as freedom fighters.

All About Lebanon • Hezbollah • Gordon Brown