Mandela celebrates with Will Smith, 46,664 others

LONDON, England (CNN) -- Hollywood star Will Smith led a crowd of 46,664 in a chorus of "Happy Birthday" to Nelson Mandela on Friday at a party for the South African prisoner, president and Nobel Peace Prize winner. 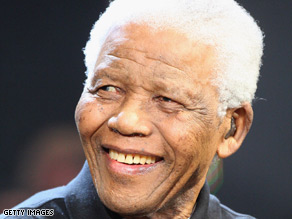 Nelson Mandela had a smile and a message.

Smith introduced Mandela to the London crowd celebrating Mandela's life with the words "The one, the only, the birthday boy, Nelson Mandela, Nelson Mandelaaaaaaaaaa."

London was the scene of a concert 20 years ago to celebrate Mandela's 70th and to raise awareness of his imprisonment.

Mandela told cheering fans, "Your voices carried across the water to inspire us in our prison cells far away. Tonight, we can stand before you free.

"We are honored to be back in London for this wonderful occasion.

"But even as we celebrate, let us remind ourselves that our work is far from complete.

"Where there is poverty and sickness, including AIDS, where human beings are being oppressed, there is more work to be done. Our work is for freedom for all."

Watch Mandela at the party »

As Mandela walked on stage, Smith led the crowd in a chorus of "Happy Birthday."

Proceeds from the concert in London's Hyde Park will go toward the 46664 Campaign, which Mandela founded in 2003 to raise awareness about the impact of AIDS, especially in Africa, and to promote HIV-prevention measures around the world.

The name of the charity represents Mandela's prison number when he was incarcerated at Robben Island. Organizers put 46,664 tickets up for sale.

The finale of the concert was scheduled as Queen, Amy Winehouse and Jerry Dammers performing "Free Nelson Mandela," a 1980s hit from the Specials that quickly became an anti-apartheid anthem, but pretty much every act joined them on stage.

Dammers was also one of the driving forces behind the London concert in 1988 to awareness of Mandela's long imprisonment by the South African authorities.

Speculation surrounded whether Winehouse would perform after being hospitalized with lung problems last week.

More than a dozen African artists, including Johnny Clegg and the Soweto Gospel Choir, performed.

Mandela served as his country's first democratically elected president from 1994 to 1999. In recent years, he has campaigned on behalf of HIV and AIDS awareness and has long called the battle against AIDS a basic human right.

In 1964, a court sentenced Mandela to life in prison for plotting to overthrow the government by violence. He spent the first 18 years at Robben Island Prison, off Cape Town, South Africa, and later spent time at Pollsmoor prison and Victor Verster Prison, closer to the mainland.

While in prison, Mandela became recognized as the most significant black leader in South Africa, and he became a potent symbol of resistance in the anti-apartheid movement. Mandela consistently refused to compromise his political position to obtain his freedom.