LONDON, England (CNN) -- European Union leaders are meeting in Brussels on Thursday for the first time since Irish voters rejected the Lisbon Treaty. 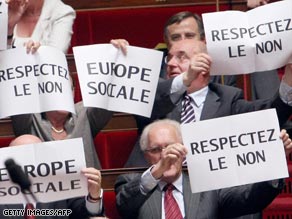 Communist deputies in the French National Assembly say Ireland's voted should be respected.

Is the summit going to conduct a post-mortem into the death of the Lisbon Treaty or are the leaders going to crowd around the twitching, pallid body and try to breathe some new life into it?

The treaty -- a reform program for the 27-member EU -- was turned down in a June 15 referendum by Irish voters and needs ratification by all member nations if it is to be adopted.

This was to have been the European Union summit when the leaders put 10 years of navel-gazing behind them.

They were to have moved on from years of grinding institutional reform to the real tasks their citizens want them to perform -- creating jobs amid the credit crunch, curbing terrorism and countering illegal immigration.

It was to have been the summit when Nicholas Sarkozy, the potential fizzing firework of the EU, gave his colleagues a sneak preview of the eye-catching program he had planned for France's turn in the six month rotating presidency, starting on July 1.

It was to have been the summit when candidates began jostling to become the EU's first permanent president of the council of ministers (as opposed to the commission president who heads the executive machine), a job created by the now frozen constitution.

But all that has been scuppered by the 862,415 no votes cast in the Irish referendum.

Thanks to those votes by less than 0.2 per cent of the EU's 497 million population the bloc is left playing catch-up again.

The presidential campaign teams can stick with their day jobs.

Instead of launching bold initiatives on a common immigration policy, a boosted European defense dimension and new links with the Mediterranean countries of North Africa, Sarkozy will find his energies drained away in damage limitation exercises.

For the moment none of them know quite what to do. The other leaders have all rushed publicly to insist they 'respect' the democratic decision of Irish voters. But they are also insisting that the treaty is not dead.

Behind the scenes they are bending every effort to see that the Irish vote is frustrated.

First of all they will be hoping that things don't get any worse, with any other EU country failing to join the 18 who have already ratified the Lisbon Treaty. In all countries except Ireland the process is being put through parliaments and lawmakers rather than referendums and citizens.

The Czech Republic's eurosceptic President Vaclav Klaus has declared the Lisbon Treaty is an ex-treaty and there are plenty more in his country who share that view.

Sarkozy's first damage limitation exercise was a morale-boosting visit to Prague to discourage the Czechs from also saying no.

The first move at the summit will be to invite the much embarrassed Prime Minister Brian Cowen to explain precisely why the Irish, a people who have done particularly well out of the EU, said no to the Lisbon Treaty.

If they know that, say some, then they can frame a protocol or an addendum to meet Irish objections and get the Irish to vote again, as they did after first voting down the Nice Treaty, a previous constitutional reform, back in 2001.

But can there be a clear enough answer?

No campaigners focused on a huge range of issues, including perceived threats to Ireland's low 12.5 percent business tax, its military neutrality, to the beliefs of a strongly Catholic country on abortion, gay marriage and euthanasia.

But there was nothing in the treaty which specifically threatened any of those.

Worries about world trade talks which could threaten the interests of Irish farmers were a factor too, again nothing to do with the treaty itself.

So would a protocol asserting Ireland's right to stick to its own ways on tax, neutrality and abortion make any difference?

Many EU officials, Irishmen and woman among them, are fearful that whatever any protocol said, another referendum might produce another No.

That would not only deepen the EU's crisis, it would probably bring down the Irish Government too.

And so many of the Irish objections were of a more general nature. According to opinion polls 30 per cent of the Irish didn't vote down the treaty because of its content but because they simply didn't understand it -- it was a fear of the unknown.

With a complex 294-page document in officialese that fear is always likely to be there.

But imagine the furor now if EU officials suggested the Irish changed their constitution so the people didn't have a vote in future.

Then there was the 'outside interference' question. Another 17 percent resented 'being told what to do' by others, like the French foreign minister who warned that Ireland would be the first to suffer from a no vote. How do you counter that with an extra protocol?

One specific which does seem to have emerged as a partial cause of the referendum no vote was an Irish fear about losing a permanent member of the European Commission.

True, that would have happened to every country under a constitution which cuts the commission from 27 permanent to 18 rotating members.

But small countries set particular store by their commission membership. We might well see some juggling there at the end of the day.

What must really give the EU leaders pause for thought is that there have now been three referendums -- in France and the Netherlands in 2005 on adopting a constitution and in Ireland on the treaty drawn up in place of the constitution.

In each case when an EU project has gone to the ballot box the concerted view of the EU leaders has been rejected.

Referendums in Denmark and Sweden on joining the euro have also produced a negative result.

In the current mood it is doubtful if you could put an EU project to the voters in any country and get a yes.

For all the prosperity the EU has brought, for all the reforms in justice and democracy and the rule of law it has helped engender in countries which exited the Soviet bloc to come aboard, people simply don't understand what the EU does.

To make itself more recognizable it has dressed itself up to look more like the nation states which people do recognize. But the more it does that the more people fear the creation of an overriding superstate.

If the EU is ever to win over European voters it has to make itself more user friendly.

And the more time it spends on constitution fixing, its leaders acknowledge with a groan, the harder that task becomes.