(CNN) -- Irish Prime Minister Brian Cowen said Friday that he was disappointed that Irish voters rejected the European Union reform treaty, but said the government "accepts and respects the verdict of the Irish people." 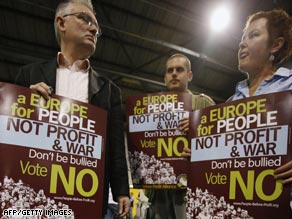 Supporters of the "no" campaign display placards during the count of the ballots for the Lisbon Treaty referendum.

"The "no" vote is a "source of disappointment to my government colleagues and me," Cowen said at a news conference, but he did not declare the treaty dead, saying instead the vote leaves Ireland and EU in "uncharted waters."

"It is our duty now to reflect on the implications of this vote for Ireland so that we can move forward and keep this country on the path of progress," he added.

The Irish Government expects to consult with EU partners to determine how to proceed, the prime minister's office said.

Electoral officials said the result was 53.4 percent no, to 46.6 percent yes.

The Lisbon Treaty, as it is formally known, can only come into effect if all 27 member nations ratify it.

Rejection leaves the EU operating under current rules. EU leaders have to decide whether to draw up a new constitution -- which would mean years of meetings and drafts -- or they could ask the Irish people to vote again.

European Commission President Jose Manuel Barroso said: "It is not the first time that we have a 'no' vote on a treaty in Europe and so let's hope that this time also we'll be able to find a solution."

"The heads of state and government of all 27 member states have signed the Treaty of Lisbon, and in 18 member states the ratification has already been completed. We therefore expect that the other member states will continue with their domestic ratification processes," the statement said.

The "no" vote is an embarrassment for Cowen, who had urged voters to approve the treaty. Cowen told the Irish Times last Friday that he trusted "the common sense of the people" in voting "yes."

Ireland is the only EU country to put the treaty to a popular vote. In every other country, legislators make the decision.

The treaty would streamline decision-making in the enlarged European Union. It would create an EU president and foreign minister and would slim down the EU Commission from 27 to 18 members, with rotating membership, to speed up the commission's work.

The commission acts as the executive branch of the union.

The treaty would also give national parliaments veto power over some proposed changes to EU policy and would change the voting weights of countries on certain issues.

Opinion polls before the vote showed it was too close to call. While the four main Irish political parties support the document, a range of groups -- from business groups to some Catholics -- staunchly oppose it.

That opposition created confusion for voters, and many -- including Cowen himself -- admitted they hadn't even read all of the document before they voted on it.

After voters in the Netherlands and France rejected a previous EU constitution in 2005, most EU countries stopped leaving such matters to their voters, instead pushing it through their national parliaments.

However, Irish law requires its citizens be given the chance to vote on anything affecting the Irish constitution, which in this case is the Lisbon Treaty. So Ireland's 3 million voters decided on a document representing the 490 million people in the European Union.

Eighteen EU countries have ratified the treaty so far and, with Ireland's vote in, a decision is pending in eight others.

Many Irish voters who oppose the treaty complained about the trimming of the European Commission from 27 to 18 members, which would mean some countries would not have a representative for years at a time. That, they say, could hit the smallest countries like Ireland hardest, as would the switch to a weighted voting system dependent largely on population sizes.

Irish businessman Declan Ganley was among those worried the treaty threatens Ireland's low corporate tax rate of 12.5 percent, though the treaty maintains a national veto on taxation issues.

Ganley founded Libertas, an EU think tank which says the "tax veto" would not necessarily apply.

The Irish Farmers' Association had concerns about EU negotiators cutting beef import tariffs in World Trade Organization talks, and, though the issue had nothing to do with the treaty, the IFA originally urged its members to vote against it.

The farmers' group reversed its position this month, however, after it said the prime minister promised to veto the cuts.