(CNN) -- The 19-year-old woman whose hospitalization exposed a shocking Austrian incest case is recovering well and wants to see the ocean and a pop concert, her doctors and a family lawyer said Wednesday. 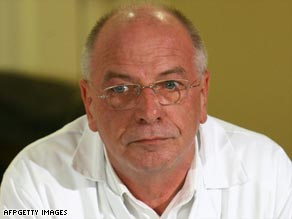 Dr. Albert Reiter, who treated Kerstin, is confident Kerstin will make a full recovery in time.

She and other children who were held captive for years are slowly adapting to modern life, they said.

Kerstin Fritzl, whom doctors placed in an artificial coma after she was admitted to a hospital in April for multiple organ failure, is now well enough to speak, stand and walk with assistance, her doctors said.

Doctors said that "little novelties" such as seeing a cloud go by are now big events for the former captives.

Kerstin has said she wants to see the ocean and go to a concert by British singer Robbie Williams, said Dr. Berhold Kepplinger, director of the clinic where the family is living.

He described how excited Kerstin was to hear Robbie Williams songs in her hospital room and said she was moving around to the music so much that doctors had to quiet her down.

It was then, Kepplinger said, that doctors became confident Kerstin can become fully healthy and develop normally. Her immune system has improved, and she is continuing to have physiotherapy, including strengthening exercises, he said.

Watch doctors describe what happened when the teen opened her eyes »

The two parts of her family -- those who were locked in a basement, like Kerstin, and those who lived above ground, apparently unaware of the abuse of their mother and siblings -- are getting to know each other again, the doctors and the family's lawyer said.

"We are so glad that things have turned out so positively so far," said lawyer Christoph Herbst, who appeared at a news conference at a hotel near Amstetten, west of Vienna, where Kerstin and her family are recovering.

Kerstin is the oldest daughter of an incestuous relationship between Elisabeth, 43, and Elisabeth's father, Josef Fritzl, 73, according to police. He is awaiting trial.

Police say he confessed to holding Elisabeth captive since 1984 and raping her repeatedly, fathering seven children with her. Six of the children survived.

Kerstin fell unconscious in April, and Elisabeth convinced her father that she needed urgent medical attention. Kerstin was admitted to a hospital in Amstetten, where staff grew suspicious and called police, who opened an investigation and uncovered the abuse.

Kerstin was suffering from kidney, lung, and liver failure when she arrived at the hospital, said Dr. Albert Reiter, director of the hospital. Doctors were able to turn her health around, but they kept her in a coma with artificial respiration for weeks, he said.

Doctors started reducing Kerstin's medication May 12, allowing her to emerge from the coma, he said. Three days later, she opened her eyes and smiled at her carers, he said, and doctors were soon able to take the breathing tube from her throat.

Her mother was at Kerstin's bedside regularly, and doctors credited that with helping Kerstin's health improve.

On Sunday, Kerstin finally met with other family members and was able to say hello to them, he said. Kerstin and the rest of the family were also able to move into an apartment at a regional clinic nearby.

"It was a special moment where, walking, we were able to support her and cross the threshold into a new house and into a new life," Reiter said.

Kerstin and two of her brothers, ages 18 and 5, had spent their entire lives trapped in the cellar with their mother, never seeing daylight. A television was their only contact with the outside world.

The other three children Josef Fritzl fathered with Elisabeth were taken as infants to live above ground with Fritzl and his wife, who says she had no idea her daughter was being held captive.

In recent weeks, the wife and the three children have had several meetings with Kerstin and the others formerly held in the basement. The doctors said that all are receiving therapy and are getting to know each other.

"It is clear that [the two sides] have a different temper of life," Kepplinger said. "These different ways of living, the two parts of the family, still have to come to some agreement."

Still, the entire family is "very happy" to be reunited, Herbst said.

"This is an incredible drawing-near to each other. There is incredible joy among them," he said. "It is wonderful to see the way they are living together."

He appealed to the public and the media to give the family privacy.

There continues to be "big ambivalence" about the "grandfather issue," as Kepplinger called it, and therapists are helping the family members cope with the complicated relationship they have with each other and with Fritzl, who is now behind bars.