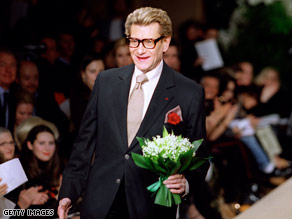 Saint Laurent, 71, was the last of an era of fashion designers that included Coco Chanel and Christian Dior, for whom Saint Laurent worked until Dior's death in 1957. Berge, chief executive of the fashion house, told France Info Radio that Saint Laurent died at 11 p.m. (5 p.m. ET).

Saint Laurent's became synonymous with the glamour of the Paris catwalk and the elegance of haute couture.

He took Paris by storm in the 1960s and 1970s with his masculine, yet elegant, trouser suits for women. He also popularized tight pants, the trapeze dress, smocks, thigh-high boots and tuxedo jackets. Saint Laurent often used ethnic themes in his designs, as well as bright colors contrasted with black.

His jackets, "le Smoking" in French, featured for the first time on the catwalk see-through shirts that shocked and delighted the public.

Watch how St. Laurent was considered a French national hero »

In a 2002 interview with CNN, London-based fashion designer Ben de Lisi called Saint Laurent an inspiration for a whole new generation of designers.

"Way back in the '60s, he was doing, for couture, crocodile biker jackets based on Marlon Brando. He was doing alligator trousers. And that was just unheard of," De Lisi said.

Saint Laurent introduced his "Ligne Trapeze" after Dior's death, when he became chief designer at Dior. He left Dior in 1961 and opened his own couture house, financed by Berge, in 1962.

Vogue magazine editor Diana Vreeland mounted a retrospective of Saint Laurent's work in 1983 at the Museum of Metropolitan Art in New York, the first time a living fashion designer had been so honored.

But after 40 years in the business, Saint Laurent, increasingly dogged by ill health, was slowing down. He retired in 2002. Some critics said his work was becoming repetitious.

In 1999, he sold the rights to the YSL brand to Gucci for $70 million, retaining control of Sanofi Beaute.

Saint Laurent was born August 1, 1936, in Oran, Algeria. After winning first prize in the International Wool Secretariat contest for his asymetrical cocktail dress in 1954, he went to work for Dior.

"Like all creators, he had two faces -- a public face and a private face. The public face, everyone knows about it. And the private face, people know it less," Berge told the radio station.

"He was shy, introverted ... had very few friends. He was hiding from the world, and was seeing very few people."