(CNN) -- They're young, fabulously wealthy and have blue blood coursing through their veins. Meet the "20 Hottest Young Royals" in the world, compiled by influential fortune tracker, Forbes magazine. 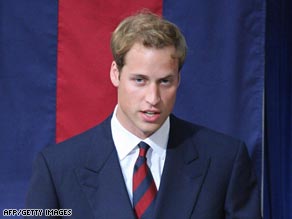 Britain's Prince William has been named "Hottest Young Royal" in the world by Forbes magazine.

The magazine used the "winning combinations of looks, money, and popularity on the Web" to come up with the list, it says.

Only unmarried royals under the age of 35 were considered.

The Forbes list proved to be a Royal knockout for British royalty.

They came in the top four of hottest young royals in the world.

With his piercing blue eyes and lantern jaw, reminiscent of a movie star, Britain's Prince William, perhaps unsurprisingly, came in at Number 1. The magazine describes him as having: "international intrigue and unparalleled media attention," combined with a "graceful public persona."

Although his crown slipped somewhat recently when he was accused of abusing his newly-acquired flying skills by "joyriding."

Watch who people on the street think is the hottest »

His relationship with girlfriend Kate Middleton is the subject of feverish speculation and an engagement announcement is eagerly anticipated by the British media.

Harry has always been known as the "bad boy prince" because of some rather unroyal behavior, such as brawling with paparazzi outside nightclubs and going to a fancy dress party dressed in Nazi regalia.

However, he has latterly re-invented himself as the "Hero prince" after a tour of duty in Afghanistan fighting the Taliban in March. Sound off: Is Prince William the world's hottest young royal?

William and Harry's cousins Zara Phillips and Princess Beatrice also came in at No. 3 and 4 respectively.

The inclusion in the list should be good news for Princess Beatrice, who recently attracted unkind comments from Britain's newspaper columnists about her curvy figure and her dress sense.

The sight of Beatrice, 19, pictured on holiday in a bikini proved too much for Daily Mail newspaper columnist Allison Pearson, who wrote: "Can't someone buy that girl a sarong? For her sake, as well as ours."

This led to an angry counterattack from Beatrice's mum, Sarah Ferguson, who thundered at a news conference to promote a reality show: "Touch me, fine, but don't touch my children."

The 20 featured on the list represent almost $60 billion in wealth and 15 royal lineages from around the world-- including some rather obscure names that even the most ardent royalist might be hard pushed to recognize.

Princess Sikhanyiso of Swaziland anyone? Coming in at Number 20, the eldest daughter of King Mswati III of Swaziland, Africa's last absolute monarch, is currently a speech and drama major at Biola University in California.

A controversial princess who raises eyebrows in her homeland with her Western-style clothes and a decision to hold a drinking party to celebrate the end of a chastity decree in 2005 resulted in a beating with a stick.

Fourth in line to the Monaco throne, Charlotte Casiraghi, is the only non-Brit to make it into the top 5. A style icon, who is known for her impeccable taste in fashion and her good looks--much like her grandmother, Hollywood icon, Grace Kelly and mother Princess Caroline.

Her brother, party prince Andrea Casiraghi, also makes an appearance on the list at Number 10. But it seems even his Hollywood lineage -- as well as his sun-kissed surfer looks were not enough to give William and Harry a run for their money in the pin-up stakes.