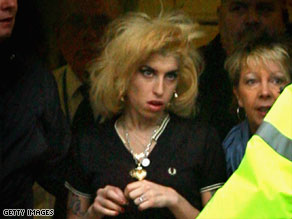 Amy Winehouse's battles with her addiction are well-documented.

"Coke-snorting fashionistas are not only damaging their noses and brains -- they are contributing to state failure on the other side of the world," wrote Antonio Maria Costa, the executive director of the UN's Office on Drugs and Crime.

The comments, published in an opinion piece in the British newspaper The Observer, was the second time in two weeks that the United Nations has criticized celebrity drug use.

A report last week by the International Narcotics Control Board said that drug laws should not be disproportionately applied. And letting celebrities get away with drug use creates a perception among youth that those offenders are treated leniently. Read about the earlier warning from the United Nations drug control agency

Costa, in his piece, said the cocaine used in Europe passes through impoverished countries in west Africa where governments haven't been able to mount an effective fight against the drug traders.

"In the 19th century, Europe's hunger for slaves devastated west Africa," he said. "Two hundred years later, its growing appetite for cocaine could do the same."

The drug trade, Costa said, has corrupted the governments of some countries, and created addicts in a continent where treatment facilities are rare.

"Amy Winehouse might adopt a defiant pose and slur her way through 'Rehab' (her Grammy Award-winning hit) but does she realize the message she sends to others who are vulnerable to addiction and who cannot afford expensive treatment?" he said.

Winehouse's battles with her addiction are well-documented. The singer -- whose song "Rehab" describes her reluctance to enter a rehabilitation center -- checked herself into one on January 24 after the leak of a home video that showed her smoking something in a glass pipe. What was in the pipe was unknown. Scotland Yard has said it is looking into the video.

Winehouse scooped up five statues at the Grammy Awards last month, including the best record and song of the year for "Rehab."

"Amy has never given a quote about drugs or flaunted it in any way," Goodman told the newspaper. "She's had some problems and is trying to get better. The U.N. should get its own house in order."

Costa also took model Kate Moss to task, contrasting her alleged actions to those of singers Bob Geldof and Bono who have campaigned against poverty in Africa.

Bob Geldof is best known for organizing a series of benefit concerts, including Live Aid. Bono, the frontman for U2, has taken on a campaign to get Western nations to write off the debt they are owed by some African countries.

"For every rebel with a cause, there are 10 others without a clue," Costa wrote.

"While some well-meaning pop idols and film stars might rage against suffering in Africa, their work is being undermined by the drug habits of careless peer such as Kate Moss."

She later issued a statement where she apologized to "all the people I have let down" and said she took "full responsibility" for her actions. E-mail to a friend