Will energy savings jump-start the economy?

NEW YORK (CNN) -- It looks like America may be getting a whole lot more energy-efficient as part of any new stimulus package. 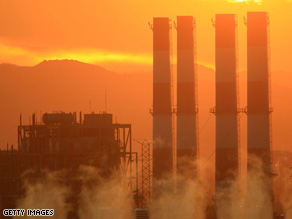 The sun sets on a Californian power station, which could be the recipient of aid under an expected stimulus plan.

But how exactly will that happen? While new light bulbs, insulation and air conditioners may play well with homeowners, will such a plan actually put enough people to work to jump-start the economy?

The energy-saving plan is expected as part of a stimulus package from lawmakers set for early January that could top $800 billion and include everything from tax breaks to road repairs.

Conservation is thought to be the first big energy-component of U.S. President-elect Barack Obama's long-term energy plan, for a couple of reasons.

First, it can be done relatively quickly using existing state and regional agencies.

Conservation is also essential if the country is to switch to cleaner and more renewable forms of electricity, since it can't currently provide the sheer megawatts that fossil fuel or nuclear power can produce.

If a major conservation initiative is included in the stimulus package, it might look something like a plan being pushed by the electric utility industry and a handful of environmental groups -- a coalition called the Alliance to Save Energy.

Under such a plan, the government would commit just over $30 billion towards making the nation energy efficient. The money would be spent as follows:

-- $3 billion for home energy retrofits, which could include rebate checks for people who buy energy-efficient appliances like air conditioners and refrigerators.

-- $3 billion for energy retrofits at public buildings, which may include hiring people to conduct energy audits and install so-called "smart-meters" that more efficiently allocate power.

-- $3 billion to promote energy efficiency in commercial buildings, largely in the form of tax breaks for developers who build them.

-- $3 billion for efficiency projects at schools.

-- $4 billion for things that include construction of a better electric grid, efficiency at military institutions, workforce training, additional smart meters, and an expansion of the weatherization program to better insulate homes.

In the interest of time, no new agencies are planned. Instead, the money would likely be administered by existing agencies, be they state, federal or regional, or utilities with strong conservation departments.

But will it work?

All told, the program might drop the country's energy consumption by half a percent each year for 20 years. While that doesn't sound like much, with the U.S. spending over $1 trillion on energy each year, the savings could top $5 billion a year, or over $100 billion.

"An economic recovery bill that includes significant investments in energy efficiency will not only create jobs immediately, but also and more importantly will bring American ingenuity and its "can-do" spirit to a new, clean and sustainable energy future," Alliance to Save Energy President Kateri Callahan said in a statement announcing the program last week.

Fine, but is it stimulating?

But should we borrow money for it and include it in a stimulus bill, a bill that's designed to create jobs and get the economy back on track?

The Alliance estimates its plan will directly create 190,000 jobs in short order.

"Clearly, it will put construction workers back to work and put money in the economy," said Brian Turmail, a spokesman for the contractors' association. "This is a tremendous opportunity."

Money well spent? Not everyone thinks so

But others see it as little more than a tremendous opportunity for waste.

"How on earth can this thing be administered without generating a lot of waste," said Rudolph Penner, a senior fellow at the Urban Institute, a research group.

Beyond the potential for waste, critics generally argue that it takes too long for the projects to start up to have the desired effect, and that the economics simply don't make sense.

Once the projects get going, they also say the projects are hard to stop and can then contribute to inflation, not to mention a ballooning debt once the economy recovers.

On the energy part specifically, Penner said it would be hard to calculate who was conserving because of the incentive, and who would normally have spent money to conserve anyway.

"Some people would chose to insulate their homes anyway," he said. "For them, this would just be a windfall."