COLOMBO, Sri Lanka (CNN) -- Five members of the Sri Lanka's Civil Defense Force (CDF) were killed in a suicide blast in Sri Lanka at a church outside the capital of Colombo Sunday morning, police said. 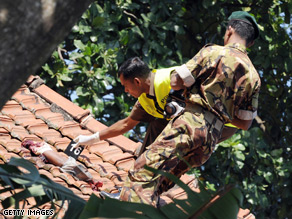 Nobody immediately claimed responsibility for the blast, but police suspect the bomber was a member of the Tamil Tiger rebels.

There was no immediate response from the Tamil Tiger rebels to the incident, which, police said, occurred at St. Anne's Church in the Colombo suburb of Wattala, located on a roadway to the country's only international airport about 15 kilometers (9 miles) north of the capital.

The attack happened during a weekly festival that usually draws a large crowd shopping for vegetables and household goods.

The suicide bomber walked into an area where CDF officers were stationed and detonated his explosives, police said.

Investigators suspect the bomber targeted the area because 150 police officers who help patrol the road to the airport are billeted there.

Government forces have engaged rebels in heavy fighting for more than a year in the Kilinochchi region, once the center of political power for the Tamil Tigers. The 25-year civil war between ethnic Tamil separatists and the Sri Lankan government has left more than 65,000 people dead.

The Tamil Tigers were founded in 1976, and the U.S. State Department designated the group a foreign terrorist organization in 1997. The rebels, formally known as the Liberation Tigers of Tamil Eelam (LTTE), are fighting for the creation of an independent nation, citing discrimination by the country's Sinhalese majority.

Commander D.K.P. Dissanayake, a navy spokesman, told CNN that four rebels were killed in attack after the boat was engulfed in fire. He said the incident occurred just after midnight Sunday but gave no other details.

There was no immediate response from the Tiger rebels to that incident. CNN could not independently verify the government's claim because media is debarred from Sri Lanka's battle zones. In the past, both sides in the conflict have exaggerated accounts of military operations.

On December 20, the Navy said it destroyed a similar rebel boat trying to smuggle military supplies through the coast near the northeastern coastal village of Mullaitivu. However, a second supply boat was caught on Air Force aerial surveillance cameras unloading along the coast.

"They included assorted ammunition, artillery shells, mortar shells and other items," a senior Air Force official told CNN. He spoke on grounds of anonymity since he was not authorized to speak to the media.