TAIPEI, Taiwan (CNN) -- Former Taiwanese President Chen Shui-bian, accused of embezzling about $18 million, has remained free on bail after a nearly eight-hour court hearing in which prosecutors argued that he should be jailed. 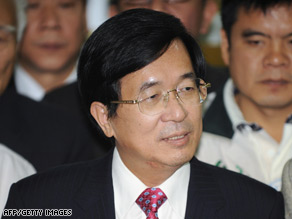 The hearing on Thursday was broadcast live from Taipei district court.

Chen -- the island's first former president to ever face prosecution -- was freed last week after spending a month in jail while prosecutors prepared his indictment on several corruption charges, including embezzlement and accepting bribes.

Judges ordered Chen released after the indictment was formally presented, saying they did not believe he was a flight risk. No trial date has been set in court papers.

Chen, whose term ended in May, is accused of embezzling about $18 million. Prosecutors allege he also took bribes, laundered money and illegally removed classified documents from the president's office.

The former president, 58, has denied any wrongdoing and insists the charges are politically motivated.

His party favors independence for Taiwan, while the administration of Nationalist President Ma Ying-jeou favors closer ties with mainland China -- from which the island split amid civil war in 1949.

If convicted, Chen faces 25 years or more in prison, although prosecutors did not call for any specific jail time in the indictment.

Thirteen others, including Chen's wife, son, daughter-in-law and brother-in-law, also were indicted.

Prosecutors said Chen's son has a Swiss bank account containing $22 million in what they believe is illegal proceeds.

All About Taiwan • China