ISLAMABAD, Pakistan (CNN) -- A suspected U.S. missile from an unmanned drone killed three people Saturday in Pakistan's tribal region, according to a Pakistani military source and a North Waziristan official. 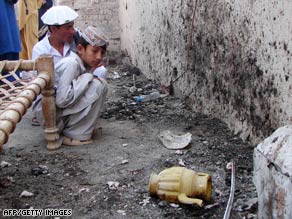 Young Pakistanis look at a house after a missile hit it in the tribal region of North Waziristan last month.

The military source asked not to be identified because he is not authorized to speak to the media.

This is the latest in a series of deadly missile strikes in Pakistan's border region over the past two months. Pakistan has repeatedly blamed the United States and condemned the strikes, saying they cost lives, violate the nation's sovereignty and undermine public support for its counterterrorism efforts.

The U.S. government has not acknowledged hitting targets within Pakistan, an ally in the war on al Qaeda launched after the September 11, 2001, attacks on New York and Washington.

The U.S-led coalition and NATO -- based in Afghanistan -- have been seeking a way to effectively battle Taliban and al Qaeda militants who they believe are launching attacks from Pakistan's swath of tribal areas along the border.

They have become frustrated with Islamabad over the years, saying it is not being active enough against militants -- a claim Pakistan denies.

A week ago Saturday, two missiles, also believed fired by a U.S. Predator drone, hit a house in the North Waziristan region and killed at least four people and wounded six others, a local official said.

North Waziristan is one of seven districts within Pakistan's ungoverned tribal region along the Afghanistan border.

On November 20, the ministry lodged a protest with Patterson against a strike in the Bannu region of Pakistan's North West Frontier Province that left five dead and seven wounded and was deeper inside Pakistani territory than previous attacks.

In October, the Foreign Ministry summoned Patterson and said strikes should be stopped immediately. At the time, a missile strike from a suspected U.S. drone on a compound in South Waziristan killed 20 people.

The United States is the only country operating in the region known have the capability to launch missiles from drones, which are controlled remotely.