MUMBAI, India (CNN) -- An Indian official said the coordinated terrorist attacks that killed at least 183 people in nine sites across Mumbai this week could have been much worse. 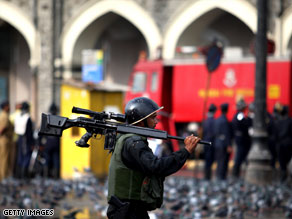 An Indian soldier carries his rifle outside the Taj Mahal Hotel on Saturday in Mumbai, India.

"We found bullets with them, hand grenades, bombs," R.R. Patil, deputy chief minister of Maharashtra state, said at a news conference. "Based on our investigation, we believe they had planned to kill 5,000 people."

Indian authorities also were investigating whether some of the attackers may have gotten away, blending into Mumbai's 18 million residents.

Another top official at the news conference pointed to a connection with Pakistan.

"Yes, the captured terrorist was Pakistani, as the home minister and others have said," said Vilasrao Deshmukh, chief minister of Maharashtra, where Mumbai is located.

"As far as the others, the accomplices, the investigation, the interrogation is under way and the details will become public very soon."

Police and soldiers continued their room-by-room sweep of the Taj Mahal Hotel late Saturday to make sure all trapped guests had been evacuated and no gunmen remained hidden.

Watch the destruction left at the hotel »

Pakistan's President Asif Ali Zardari pledged his country's full cooperation with the investigation and vowed to take "the strictest action" if it is found the terrorists were based in Pakistan.

Investigators probing the attacks said they found cell phones and a global navigational device on an abandoned boat floating off the coast of Mumbai, CNN's sister station CNN-IBN reported.

The television station showed photographs of a phone's log that indicated calls had been placed to Pakistan.

The boat, intelligence officials told CNN-IBN, had been hijacked. The captain was found dead, lying face down with his hands bound behind his back. Four crew members were missing.

Zardari -- whose wife, Benazir Bhutto, was assassinated a year ago -- said he was "as committed as can be" to wiping out the terrorists because they also threaten him and his country.

"They may not be the same individuals, but they are definitely the same forces with the same mindset."

Zardari said Pakistan's cooperation with Indian investigators will be present "without any hesitation whatsoever."

"As the president of Pakistan, let me assure you, if any evidence points to any individual or group in my part of the country, I shall take the strictest of action in light of the evidence and in front of the world."

Pakistan's foreign minister, Shah Mahmood Qureshi, vowed Saturday to take action against any group within its borders if it is found to be involved with the attacks.

President Bush, returning to Washington on Saturday from a Thanksgiving break at Camp David, Maryland, extended condolences and support to the Indian people and government.

"The killers that struck this week are brutal and violent. But terror will not have the final word," Bush said on the south lawn of the White House. "The people of India are resilient, the people of India are strong. They've built a vibrant, multi-ethnic democracy that can withstand this trial."

Meanwhile, security forces at the Taj hotel, the site of the terrorists' final stand, carried out a series of controlled explosions Saturday afternoon to defuse explosives they came across as they combed through the 565 rooms of the Victorian structure. Read more about those killed in the terror attacks

J.K. Dutt, director-general of the National Security Guard, told a throng of reporters that security forces had killed three gunmen during the mission to clear the Taj hotel, but officials were not ready to declare the operation over until they finished their room-by-room search.

Dutt appealed to guests who may be hiding in their rooms to open their window curtains to signal their presence to security officials.

The hotel was secured Saturday morning. Minutes earlier, a fire -- which Dutt said had been set by the terrorists as a diversionary tactic -- swept through the ground floor of the 105-year-old building and coincided with an end to rifle fire. The blaze was quickly brought under control.

Learn more about the hotel's history and future »

Meanwhile thousands gathered at the city's largest park, Shivaji Park, to say farewell to Hemant Karkare, the head of Mumbai's antiterrorism squad. Karkare was shot three times by gunmen outside the Cama Hospital, one of nine sites the attackers targeted Wednesday night. He was one of at least 17 police officers who died in the attacks.

By Saturday evening the death toll from the attacks reached at least 183, federal officials said. State officials are reviewing the higher toll of 195 they released earlier.

The official death toll does not include the at least 11 gunmen killed.

The toll is expected to rise as authorities count the casualties inside the Taj Mahal Hotel, whose burned-out lobby was littered with shards of glass.

Indian officials found five bodies of hostages who had been held inside the Chabad House, a Jewish community center.

The dead included an American rabbi, his Israeli wife, a second American rabbi and two other people. Two gunmen were also killed.

At the Oberoi Hotel -- another luxury hotel where gunmen took hostages before they were killed -- 36 people were found dead, according to Bhushan Gagrani, a state official for Maharashtra, where Mumbai is located.

"We were in there for 36 hours in our room," said Vinka Clemmett, one of the survivors of the Oberoi attack. "We heard the first explosion ... kind of a big silver tray had dropped on the floor. And then about five minutes later, (we) heard the shooting, and it just went on and on. And my first reaction was, 'Oh, God forgive them,' because I knew that people were being killed. It was just obvious that something terrible was happening."

A UK security source told CNN that officials were investigating why two bodies believed to be those of terrorists were found with British identification documents. He said another gunman was captured alive.

The gunmen were in their 20s and appeared well-trained, a member of the Indian navy's commando unit said. Police say boats took the men to Mumbai's waterfront near the Gateway of India monument, near the Taj hotel.

Officials said the men had prepared for months, setting up "control rooms" in the two hotels.

Indian authorities said no one had claimed responsibility, although a group calling itself Deccan Mujahideen said in e-mails to Indian news outlets that it was behind the attack.