BANGKOK, Thailand (CNN) -- After 17 hours, Kerri Gannon and her husband were still stranded in an airport in Bangkok, Thailand, Wednesday, trying to find a way home to the United States after the facility was occupied by crowds of protesters and closed. 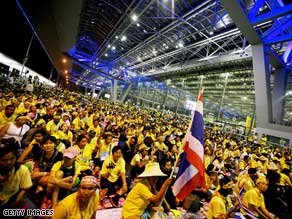 The newly married husband and wife, in Thailand for their honeymoon, were struggling to find a way home to California after explosions at two Bangkok airports wounded four people and both airports were shut down.

The day before, thousands of anti-government protesters stormed the airports to protest the return of Thai Prime Minister Somchai Wongsawat from an economic summit in Peru.

"The upper level outside is really crowded with protesters and for the most part they're kind of quiet and polite," Gannon said from the airport. "They're roaming the airport, they're cheering and clapping and walking around, but it's clearly their domain."

It was not clear which of the two occupied airports she was speaking from, but tourists were stranded in both.

The People's Alliance for Democracy , which is leading the protests, said it will not end its occupation of the airports until the prime minister resigns. They accuse his government of being a front for ousted former Prime Minister Thaksin Shinawatra.

Pro- and anti-government protesters also exchanged gunfire Tuesday, a Thai police official said. Protesters with golf clubs and long wooden sticks clashed with airport taxi drivers, with each side throwing objects at the other.

Protesters blockaded people trying to get to one of the airports. They directed travelers to exit onto the access roads.

"I'm trying to get out of this place, but I'm stuck," iReporter Arjan Sing, who was on a two-week vacation to India and stopped in Bangkok to visit a friend's family. "When we took the exit there were lots of tourists standing around wondering what they were going to do."

Gannon said the situation started off fairly relaxed, but tensions were escalating.

"As more and more tourists leave [the airport], the fact that we don't have any information and there's no one to give us information, now we feel stranded here and we don't know where to go," Gannon said. "It seems a little bit more hostile than it was earlier."

Gannon said she's heard nothing from airport personnel and her quest for answers is hurt even more by the fact that many people in the airport speak no English.

"I don't know what happened to my flight," one woman waiting in an airport told CNN. "They won't talk to us and I'm angry and sad because I have two small children and they're sick so we want to go home."

The airlines have also been mum on the situation, Gannon said, making it difficult for them to decide whether to wait it out at the airport or try to find a hotel.

"We've had absolutely no contact from our air carrier," Gannon said. "But that seems to be universal across the board."

One traveler said the wait was frustrating.

"They've started coming through and telling us that we possibly might be out of here in the morning," he told CNN. "But either way, there's no problem. We just sit here and relax and enjoy the ride."

Gannon said she and her new spouse just hope to get home sometime in the near future.

"We've been gone for 17 days and [the honeymoon] was good -- until now," she said. "We are just trying to go home, get back to work and Thanksgiving."

All About Thaksin Shinawatra • Bangkok • Thailand • People's Alliance for Democracy