(CNN) -- Allies of Philippines President Gloria Macapagal Arroyo on Wednesday defeated an attempt by opposition leaders to impeach her on large-scale corruption charges -- the fourth such attempt in four years. 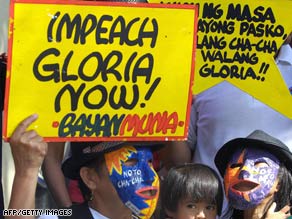 Protesters display slogans in front of the House of Representatives in Manila on Tuesday.

The House Justice Committee dismissed the impeachment complaint by 42-8 votes, saying that it was "insufficient in substance," the state-run Philippines News Agency reported.

The complaint alleged that Arroyo and her husband were directly involved in an Internet broadband deal with a Chinese firm. The deal was ultimately scrapped amid allegations of corruption.

"I'm not saying that there is no substance (to the complaint), but it was insufficient," Deputy House Speaker Pablo Garcia told the committee before the vote.

"The allegations are not allegations of fact. They are conclusions, opinion, inferences, and even arguments," Garcia said, according to the news agency.

Arroyo first took office in 2001. Since then, she has survived four impeachment attempts and periodic rumors of coup.

She won re-election in 2004, but opposition parties called into question the legitimacy of that race.

During the vote count, Arroyo was tape-recorded talking to a senior election official, which opposition leaders charge is evidence she manipulated the outcome. The president has denied any wrongdoing.

The first of the impeachment charges were brought against Arroyo in 2005 for vote-tampering. Congress rejected the charges.

The opposition then tried to impeach Arroyo in 2006 and 2007 -- and Congress dismissed those attempts as well.

All About Philippines • Manila • Gloria Macapagal-Arroyo