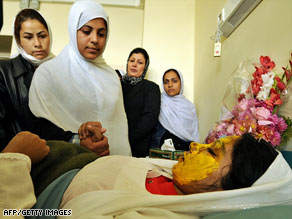 Schoolgirls visit a 17-year-old victim of this month's acid attack at a hospital in Kabul, Afghanistan.

The militants confessed and said they were paid 100,000 Pakistani rupees ($1,265) to carry out the acts, said Rahmatullah Raufi, governor of Kandahar, where the November 12 attack occurred.

The men said high-ranking Taliban officials in Pakistan paid them to cross the porous border to carry out the attack, Raufi said.

The attackers used water pistols to spray acid on girls walking to school in the southern Afghan city of Kandahar, blinding at least two of them, U.S. military officials said at the time.

Kandahar government spokesman Parwaz Ayoubi gave different figures on the number of girls injured, saying that six were burned, including one severely. He called the attackers "enemies of education."

Girls were forbidden to attend school under the Taliban, which ruled Afghanistan from 1996 to 2001, when U.S.-led forces removed them from power.

All About Afghanistan • The Taliban • Kandahar