NEW DELHI, India (CNN) -- Tibetan exile leaders gathered in northern India on Monday after their spiritual leader, the Dalai Lama, acknowledged he has failed in his efforts to convince China to restore the territory's autonomy. 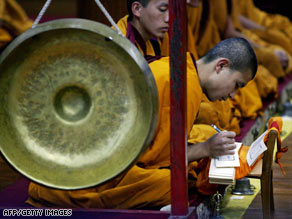 Tibetan monks in exile pray at a temple in Dharamsala, India, on Sunday.

The Dalai Lama will not be at the week-long conference in the northern Indian hill town of Dharamsala, where he lives in exile. The meeting, he said, was intended to offer the exiles an opportunity to discuss "the best possible future course of action" in Tibet's decades-long struggle.

"(U)ntil now we have followed the Middle-Way Approach, and eight rounds of talks have taken place since contact with the PRC (People's Republic of China) was restored in 2002," he said in a statement posted on his Web site.

Watch more about the meeting of Tibetan exiles »

"Despite this approach receiving widespread appreciation from the international community, as well as the support of many Chinese intellectuals, there have been no positive signs or changes in Tibet."

The "middle way" approach with Beijing is one where Tibetans want a level of autonomy that will allow them to protect and preserve their culture, and religion and national identity. In exchange, China can continue to claim Tibet as part of its territory.

Some in Tibet have advocated independence from China, but the Dalai Lama has long called for genuine autonomy.

Tibet is technically autonomous from the central Chinese government, but the Dalai Lama and others have said they favor real autonomy and resent the slow erosion of their culture amid an influx of Han Chinese -- the most numerous ethnic group in China.

The resentment bubbled over in March, when Buddhist monks initiated peaceful anti-Chinese protests in the Tibetan capital Lhasa. The demonstrations began March 14, the anniversary of a failed 1959 uprising against Beijing's rule that sent the Dalai Lama into exile.

The protests soon turned violent, with demonstrators burning vehicles and shops. Some protesters advocated independence from China, while others demonstrated against the growing influence of the Han Chinese in Tibet and other regions of China with ethnic Tibetan populations.

Beijing blamed the Dalai Lama and his followers for the March riots -- a charge he has consistently denied.

"During those testing times, out of profound concern and a deep sense of responsibility, I exercised whatever influence I have with the international community and with China, including writing personally to President Hu Jintao. But my efforts hardly made any difference," the Dalai Lama said in his statement.

The special meeting this week, he said, is being convened "with the express purpose of providing a forum to understand the real opinions and views of the Tibetan people through free and frank discussions."

"(A)ll the participants, as Tibetan citizens should discuss in a spirit of equality, cooperation and collective responsibility the best possible future course of action to advance the Tibetan cause," he said.

All About Tibet • China • Culture and Lifestyle • Dalai Lama