ISLAMABAD, Pakistan (CNN) -- Iran has condemned the kidnapping of one of its diplomats in northwest Pakistan on Thursday, calling it an "act of terrorism," an Iranian foreign ministry spokesman said. 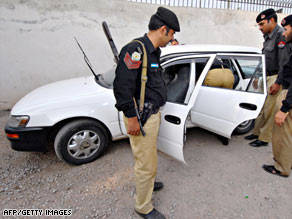 Pakistani policemen inspect a bullet-riddled car of a kidnapped Iranian diplomat on Thursday.

"Pakistan should do its best to protect foreign diplomats and their residential places," the spokesman Hassan Qashqavi said, according to Iran's state-run IRNA news agency.

At least four gunmen abducted Heshmatollah Attarzadeh near his home in Peshawar as he headed to work at the Iranian consulate, according to Pakistani police and Iranian diplomatic officials.

His bodyguard, a Pakistani police officer, was shot and killed when the two men tried to resist, a Peshawar police official said.

Pakistan's Foreign Minister Shah Mahmood Qureshi also "strongly condemned" the attack, and informed Iran that the government "will take all necessary measures for his safe and early recovery."

Attarzadeh is a commercial attache for the Iranian consulate in Peshawar. It is the second attack targeting a foreign worker in Peshawar in two days.

An American aid worker was shot and killed outside the Iranian consulate in Peshawar on Wednesday.

Stephen Vance worked for a non-profit foundation funded by the U.S. Agency for International Development that helped find jobs for people in Pakistan's tribal regions, according to a statement from his employer, the Cooperative Housing Foundation International.

"Stephen had fully immersed himself in the community in which he worked," the statement said. "He dressed traditionally and even sent his children to local schools."

Vance, 52, a native of California, is survived by his wife and five children -- all of whom lived with him in Peshawar -- CHF International official Bill Holbrook told CNN.

The attacks come less than three months after gunmen opened fire on a vehicle carrying the senior U.S. diplomat in Peshawar, Lynne Tracy. She escaped unharmed.

Peshawar is the capital of Pakistan's North West Frontier Province, an area rife with Islamic extremists and the site of recent clashes between security forces and militants.

In late June, Pakistan's military launched an offensive in the province -- the biggest push against extremists in the tribal region since the civilian government took power in March. Islamic militants vowed to retaliate.

Since then, militants have launched several deadly attacks.

Pakistan's new government has tried to negotiate a deal with militants as part of its efforts to bypass military might and achieve peace through talks.

All About Pakistan • Al Qaeda • The Taliban • Afghanistan