JAKARTA, Indonesia (CNN) -- The bodies of two of the three men executed for the deadly bombing of two nightclubs in Bali, Indonesia, were returned to their village Sunday. 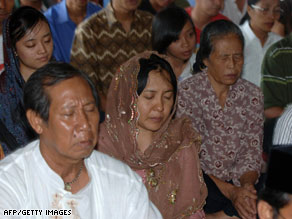 Balinese relatives of Bali bombing victims pray in the resort island on Sunday following the executions.

At least one police officer was injured by "pushing and shoving" between police and funeral-goers as the bodies of two executed brothers were returned to their families in Tenggulun.

It was unclear where the body of the third executed bomber was.

Hundreds of police were in Tenggulun and Serang, cities in East and West Java province respectively, where supporters awaited the bodies, The Associated Press reported.

Early Sunday, the three convicted bombers were executed by firing squad. Imam Samudra, Amrozi bin Nurhasyim and his brother Mukhlas, who is also known as Ali Ghufron, were executed at 12:15 a.m. at Nusa Kampangan prison, said Jasman Panjaitan, a spokesman for Indonesia's attorney-general.

Autopsies were performed the men before the bodies were turned over to their families, Panjaitan said.

Burial was to take place within 24 hours, per Muslim tradition.

The deadly bombing ripped through two popular nightclubs in Kuta, on the Indonesian resort island of Bali, in October 2002.

The blasts killed 202 people -- more than half foreign tourists -- and injured more than 300. Dozens of victims were burned beyond recognition or blown to pieces by the massive blasts.

Among the dead were 88 Australians, 28 Britons and eight Americans, The Associated Press reported.

Peter Hughes, 48, who survived the bombings, said news of the executions took him back to "the actual moment" when the first bomb went off.

"We had to fight for our life pretty hard back then, and it's a been a struggle every day since," Hughes said.

More than half of his body was burned, and he had horrific cuts, he said. He said it took two years to recover from his injuries.

"I guess I'm truly lucky," he said. "But you know, the scars on the outside to me aren't so bad, but it's what's on the inside. You cope [with] it mentally, and I guess that's the worst scar of all.

"You're living that every day. And every day you're actually going through it. It's just a battle," he said. "These three bombers who have been executed, it's all over for them now, but I have to get up tomorrow and do exactly the same thing."

Authorities blame the attacks on the al Qaeda-linked Jemaah Islamiyah, which aims to create a Muslim "superstate" across much of Southeast Asia.

Amrozi's and Mukhlas' brother, Ja'far Shodeq, said he still believes that his siblings were innocent.

He claimed that Amrozi was in their hometown, Tenggulun, the night of the attack watching football, despite Amrozi's admission to CNN that he bought the explosive ingredients and the van used in the attack.

"It's been a long journey, and it's been six long years for this to work its way through the Indonesian judicial system, but it's a good day because at least justice has been delivered, and the three people who were most responsible for this truly horrific atrocity have finally met the fate that they deserve," said Sananand Dhume, author of "My Friend the Fanatic: Travels with an Indonesian Islamist."

The men showed neither fear nor remorse in recent interviews with CNN. They had asked to be beheaded, saying it was the Islamic way of execution, but the execution was accomplished by firing squad.

A lawyer for the men said he sent a letter to the president of Indonesia but would not say what the letter said.

Speculation had grown in recent days that the executions were imminent when graves were dug in Tenggulun, in Indonesia's East Java province.

One grave was dug this week for the brothers in the same cemetery where their father is buried.

On Saturday, Amrozi's two wives and daughter, his brother's two wives and the men's brothers traveled to Nusakambangan Prison in central Java, where the men were executed, according to Antara, the national news agency of Indonesia. The agency quoted Abu Sholeh, head of the village of Tenggulun.

Hundreds of members of hardline Muslim groups have arrived in the village. Some threaten revenge and say others will take the place of Amrozi and Mukhlas.

Maria Kotronakis of Sydney, Australia, whose two sisters were killed, said she was angry that the men never showed remorse, but with the executions, "justice has been served."

"By executing them, the Indonesian government has said, 'No terrorists allowed,' " she added.

All About Indonesia • Bali • Terrorism • Australia