LONDON, England (CNN) -- The beatings, the broken bones, the squalid conditions -- it was "nothing," former prisoner Amir Fakhravar has told CNN, compared to the pain that he suffered under "white torture" in an Iranian jail. 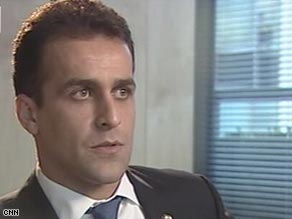 Amir Fakhravar believes that change in Iran will only come from complete isolation.

It says that he was held at a 'covert' detention center used by the Iranian Revolutionary Guard.

The organization added that he had to slip a white piece of paper under the door if he wanted to use the toilet. Even the guards wore padded shoes to muffle any sound. The organization describes the silence as "deafening" and "inhumane."

"I was there for eight months and after those months I couldn't remember my father and my mother's face," says Fakhravar. "When they released me from that prison I was not a normal person."

Fakhravar has said he was first arrested aged 17 after criticizing the Iranian regime through speeches and writings, and spent more than five years shuttling between Iranian prisons and being tortured. The "white torture" began in January 2004 and lasted until August of that year.

He eventually escaped to the United States but has said he will not rest until there is regime change in his homeland.

As a young medical student, Fakhravar has said he wanted reform, not regime change, and struggled in prison to understand why the Iranian government was putting him through such extraordinary and dehumanizing psychological torture.

"That was the question for us. I asked my interrogator: 'What do you want from us?' And after several times experiencing this I realized they want to inject fear into Iranian society, all of Iranian society."

Fakhravar has said that he now knows how dangerous the Iranian regime is and how determined its leaders are to export the Islamic revolution around the world.

"They are trying to brainwash all the children in Iran," Fakhravar said, claiming that there is an institutional program to indoctrinate all Iranian children into believing the globe should be converted to Shia Islam.

"Iranian children, Iranian students, they are suffering a really bad time in school and they are more dangerous than the atomic bomb."

Fakhravar believes that change in Iran will only come from complete isolation, enforced by severe economic sanctions.

He also offered some sobering advice for American presidential candidate Barack Obama, who has said he believes the U.S. should engage Iran through dialogue.

"He cannot find anybody to talk to him," said Fakhravar. "It doesn't work, and I'm sure that the Islamic republic will be closer to an atomic bomb."