Talks with Taliban agreed -- with strings

ISLAMABAD, Pakistan (CNN) -- Afghan and Pakistani tribal leaders have agreed to seek talks with Taliban leaders and other militant groups, so long as they promise to abide by the laws of each country. 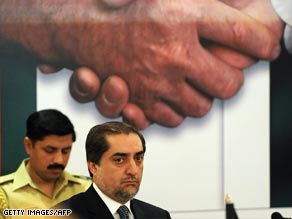 The two-day conference, or jirga, ended Tuesday concluding the best way to expedite the process of peace and reconciliation -- and end violence -- would be by establishing contact with the "opposition," according to comments at a news conference.

Earlier this month, U.S. Defense Secretary Robert Gates said the United States would be prepared to reconcile with the Taliban if the Afghan government pursued talks to end the seven-year conflict in that country. White House spokesman Dana Perino said Tuesday talks with Taliban elements are currently being considered in Washington.

The tribal leaders came from the border areas of both countries to attend the conference, dubbed a mini-jirga because of its size.

The group was divided into committees to work on various issues until the next jirga scheduled for two months.

Jirgas have long been used by ethnic Pashtuns along the Afghan-Pakistan border to resolve conflicts and make decisions.

At a similar, but larger, peace jirga in August 2007 in Kabul, Afghanistan's capital, then-Pakistan President Pervez Musharraf said military action and diplomacy were keys in the fight against the rise in Taliban extremism plaguing Pakistan.

The border region has long been considered by U.S. intelligence as a safe haven for al Qaeda and Taliban fighters battling U.S. and Afghan troops.

Pakistan and Afghanistan have been bitterly divided over the issue of dealing with extremists along the lawless border, particularly when Musharraf was in power.

The Pakistan government that took over in March has listed dialogue with the opposition as part of a three-pronged strategy to bring about peace. The other strategies are social and economic development and, as a last resort, force.

In Washington, Perino said Tuesday that the United States "realize(s) that we have to reach out on some level" to the militants, and the Bush administration is considering talks with the Taliban as part of its ongoing strategic review of Afghanistan.

"Whether or not some elements of the Taliban would renounce violence and extremism and work for the greater good of Afghanistan remains to be seen," she said.

Another plan being developed under the direction of the chairman of the Joint Chiefs of Staff, Adm. Mike Mullen, focuses on the idea that Afghanistan and Pakistan are linked by a common insurgency that stretches along their border, according to a Pentagon official with knowledge of the issue.

Mullen said earlier this month that empowering tribal militias that have influence in both Pakistan -- where U.S. forces have limited access -- and Afghanistan -- where the United States is training more Afghan security forces to bolster troop levels -- could reduce violence.

By giving legitimate power to some militias, the plan addresses U.S. commanders' frustration with Afghan President Hamid Karzai's government, which is viewed as not very effective outside the capital, Kabul.

The official said the plan is expected to be completed later this year. There is no political timeline attached to the report, according to the official.

Speaking at a NATO conference earlier this month, Gates said any talks with the Taliban would mirror the U.S. strategy in Iraq. The talks would not include al Qaeda, Gates said.

CNN's Reza Sayah and Mike Mount contributed to this report

All About Afghanistan • Pakistan • The Taliban