HIMACHAL PRADESH, India (CNN) -- Amar and Kundan Singh Pundir are brothers. Younger brother Amar breaks rocks in a mine for a living. Kundan farms their small piece of inherited land. They live in a beautiful but remote hillside village in the clouds of Himachal Pradesh, India. 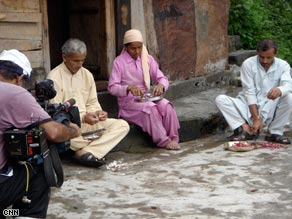 Both aged in their forties, the two brothers have lived together nearly their whole lives. They are poor and share just about everything: Their home, their work and a wife.

"See we have a tradition from the beginning to have a family of five to 10 people. Two brothers and one wife." Kundan says.

They practice what is known as fraternal polyandry -- where the brothers of one family marry the same woman. Why? Tradition and economics.

Life is hard here. The village is precariously perched on the side of a very steep hill about 6,000ft up. Most of the villagers survive off tiny plots of cropland.

In this difficult terrain there isn't enough land to go around. So, instead of finding separate wives and splitting up their inherited property, the brothers marry the same woman and keep their land together.

But like any married couple they fight mostly over mundane stuff, except there are three spouses instead of two.

One thing they agreed on was the need to have children; They have three. So how does a married trio deal with sex?

"We make shifts, change shifts and sleep on alternate days. We have to make shifts otherwise it won't work," Kundan says.

"To run our families we have to do this, overcome the hurdles as well and then we have to control our hearts from feeling too much," Amar adds.

To outsiders their arrangement may seem odd, but in the village of about 200 it is the norm.

Typically the marriages are arranged and women have two husbands. But some wives have three or four depending on how many brothers there are in a family.

Polyandry is illegal in India but socially acceptable here. No one from the government seems to bother the villagers about the law.

And as to the question of which husband is the biological father of the children -- the Pundir's don't know and don't care.

Even as modern society arrives in this ancient village through satellite dishes and mobile phones, the Pundirs say they want their age-old tradition to continue with their children.

He and his younger brother have already discussed it and will marry the same woman.

Daughter Sunita isn't so sure.

But when asked if she will marry for love or tradition, Sunita's answer makes it clear the tradition of marrying more than one man will continue with the next generation.

"I will never leave our tradition even if I have to forgo love. I will never spoil my parents' reputation and my brothers.'"