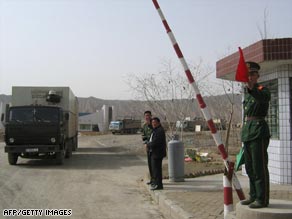 The earthquake occurred near Kyrgyzstan's border with China.

Gulshat Kadirova, an official from the Kyrgyz Ministry of Emergency Situations, told CNN that casualty figures were preliminary and could rise as rescue efforts progress.

The weekend quake, measured by the U.S. Geological Survey Report, rattled all of Central Asia; however destruction is concentrated in the remote village of Nura on Kyrgyzstan's border with China.

"The remoteness of the villages hit by the earthquake, the absence of means of communications and the destruction of roads are hindering assistance to the injured," the Kyrgyz Health Ministry press service told Interfax.

The Health Ministry of Kyrgyzstan has set-up a crisis center in the region, however rescue efforts remain difficult, according to a ministry official.

"Four helicopters have just left taking food and blankets to the people affected in the area," a ministry representative told CNN by phone.

Russian President Dmitry Medvedev sent a letter of condolence to Kyrgyz President Kurmanbek Bakiyev, according to the Kremlin's Web site.

Bakiyev is scheduled to visit the destroyed region of Nura this week to monitor the search-and-rescue operations, Kadirova told CNN.

Temblors continued in Central Asia on Monday with two strong earthquakes striking part of Tibet within 15 minutes of each other.