LONDON, England (CNN) -- In a groundbreaking meeting, King Abdullah of Saudi Arabia recently hosted talks between the Afghan government and the Taliban militant group, according to a source familiar with the talks. 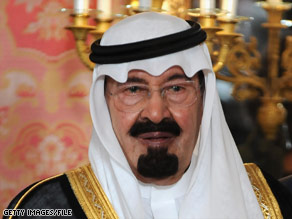 The historic four-day meeting took place during the last week of September in the Saudi city of Mecca, according to the source, who spoke on the condition of anonymity due to the sensitivity of the negotiations.

King Abdullah broke fast during the Eid al-Fitr holiday with the 17-member Afghan delegation -- an act intended to show his commitment to ending the conflict.

Eid al-Fitr marks the end of Ramadan, the Muslim holy month of fasting.

Taliban leader Mullah Omar was not present, the source said.

It marks a significant departure by the Saudi leadership to take a direct role in Afghanistan, hosting some delegates who have until recently been their enemies.

In the past, Saudi Arabia has generally dealt with Afghanistan through Pakistan.

The desert kingdom's current foray marks a significant shift and appears to recognize the political weakness of Pakistan and the need to stem the growth of al Qaeda.

The current round of talks is anticipated to be a first step in a long process. According to the source close to the talks, it has taken two years of behind-the-scenes meetings to get to this point.

The talks took place between September 24 and 27 and involved 11 Taliban delegates, two Afghan government officials, a representative of former mujahadeen commander and U.S. foe Gulbadin Hekmatyar, and three others.

It was the first such meeting aimed at bringing a negotiated settlement to the Afghan conflict and for the first time, all parties were able to discuss their positions and objectives openly and transparently, the source said.

Saudi Arabia was one of only three countries that recognized the Taliban leadership during its rule over Afghanistan in the 1990s, but that relationship was severed over Mullah Omar's refusal to hand over al Qaeda leader Osama bin Laden.

While Mullah Omar was not present at the talks in Mecca, the source said the Taliban leader has made it clear he is no longer allied with al Qaeda -- a position that has never been publicly stated but emerged at the talks.

It confirms what another source with an intimate knowledge of the Taliban and Mullah Omar has told CNN in the past.

During the talks, all parties agreed that the only solution to Afghanistan's conflict is through dialogue, not fighting. The source described the Mecca talks as an ice-breaking meeting where expectations were kept necessarily low.

The reasons for Saudi Arabia's involvement are numerous, including having the trust of the United States and Europe to play a positive role at a time when the conflict appears to be worsening and the coalition's casualty toll is climbing.

Also, Saudi Arabia may fear that Iran could take advantage of U.S. failings in Afghanistan, as it is seen to be doing in Iraq.