(CNN) -- American al Qaeda member Adam Gadahn appeared in a video posted on the Internet on Saturday, focusing on Pakistan, with references to the U.S. economic meltdown and fighting in Kashmir. 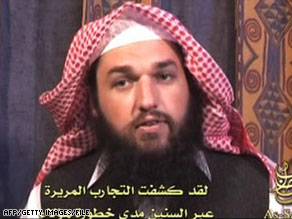 Adam Gadahn, also known as Azzam the American, is seen in a video posted on the Internet in August 2007.

The rambling, wide-ranging video was released by www.LauraMansfield.com, a Web site that analyzes terrorism. The 32-minute video was produced by As Sahab, al Qaeda's video production arm.

Gadahn, also known as Azzam the American, is on the FBI's Most Wanted List, with a reward of up to $1 million for information leading to his capture. He was indicted in 2006 on charges of offering material support for terrorism and treason, making him the first American charged with treason since World War II. He has renounced his American citizenship.

"It's time for you to put aside tribal, ethnic and territorial differences and petty worldly disputes not just for now but forever and unite to restore the glories of your forefathers and hasten, Allah willing, the defeat of the Zionist-crusader enemy and the establishment of the Islamic state, the Ummah, the so eagerly anticipated," Gadahn says in English.

Gadahn also notes that "victory in Kashmir" has been delayed for years, adding that, "It is the liberation of the jihad there from this interference which, Allah willing, will be the first step towards victory over the Hindu occupiers of that Islam land."

He also cited the economic woes in the U.S. economy.

"The enemies of Islam are facing a crushing defeat, which is beginning to manifest itself in the extending crisis their economy is experiencing. The crisis, whose primary cause, in addition to the abortive and unsustainable crusades they are waging in Afghanistan, Pakistan and Iraq, is they are turning their backs on Allah's revealed laws, which forbid interest-bearing transactions, exploitation, greed and and injustice in all its forms and demand the worship of Allah alone to the exclusion of all false gods, including money and power," he said.

Gadahn, who grew up in rural California, embraced Islam in the mid-1990s and moved to Pakistan. Since October 2004, he has appeared in at least eight al Qaeda videos speaking in English and praising the terrorist network.

In a video released in January, Gadahn renounced his U.S. citizenship and destroyed his passport on camera, saying, "I don't need it to travel anyway."

His demands have ranged from pulling out all soldiers from "every Muslim land" to halting support of the "enemies of Islam" and freeing all Muslims in detention centers and prisons.

Failure to take any one of the steps, he said, would be "considered sufficient justification" for continuing the fighting and killing.

However, according to CNN Senior Arab Affairs Editor Octavia Nasr, no known terrorism activity has been linked to his messages.

All About Adam Gadahn • Al Qaeda • Jammu and Kashmir