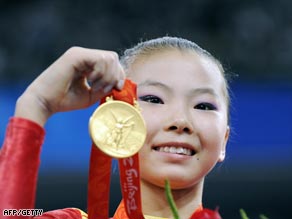 Widespread reports claimed that gold medal winner He Kexin was only 14 years old.

The federation said it has concluded its inquiry into the matter after it confirmed the gymnasts' ages through official documents that the Chinese Gymnasts Association provided. The documents included passports, identity cards and household registers.

However, the organization intends to further investigate the ages of two gymnasts, Dong Fangxiao and Yang Yun, who participated in the 2000 summer games in Sydney, Australia. The federation said it did not consider the explanations and evidence that Chinese authorities provided in regard to those athletes as satisfactory.

The International Olympic Committee had asked gymnastics officials to clarify the situation after numerous commentators, bloggers and others questioned whether about half the members of China's team were old enough to compete.

Athletes must be at least 16 in the year the games take place. In women's gymnastics, younger girls can have an advantage over older competitors on account of their often smaller, lighter and more agile bodies.

The Chinese women's gymnastics team won a gold medal in a team competition at the Beijing games, and five members won individual medals.

One of the challenges came from a blogger known as "Stryde Hax." The blogger claimed to have uncovered proof that Chinese gymnast He Kexin is only 14.

In Internet searches, "Stryde Hax" allegedly uncovered Web pages showing lists complied by China's General Administration of Sport that show a 1994 date of birth for He.

CNN was not been able to independently verify the information, but snapshots of the Web pages appeared to back up the claim. Other bloggers joined the search and reported similar results.

The New York Times conducted its own investigation, producing similar results that seem to implicate He and two other members of the team. The Times uncovered a 2006 biography on He that lists her birthday as January 1, 1994.

The International Gymnastics Federation, however, has said that those gymnasts were eligible and that the ages on their passports were correct.

"Asians have different figures than people from the West, so that's what caused their suspicion," said Huang Yubin, head coach of the men's and women's teams, referring to media inquiries. "They shouldn't be suspicious."