ISLAMABAD, Pakistan (CNN) -- British Airways is suspending flights to and from Pakistan indefinitely following the deadly bomb attack on the Marriott Hotel, the airline says. 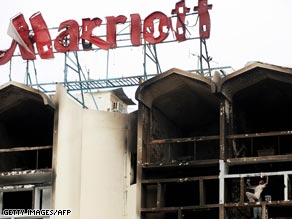 BA said it operated at least three flights a week from London's Heathrow to the Pakistan's capital Islamabad, the site of the attack.

Soon after Saturday's attack, the airline temporarily halted its flights and said it would review operations later in the week. Tuesday's announcement extends the suspension.

The suicide bombing of Islamabad's best-known hotel killed more than 50 people, including two U.S. military personnel and the Czech Ambassador to Pakistan.

The Pentagon on Tuesday named the second of the two Americans killed as Navy Petty Officer Matthew J. O'Bryant, 22, of Duluth, Georgia.

A U.S. State Department contractor is unaccounted for in the aftermath of the blast.

The bombing wounded more than 250 and sparked a fire that left the hotel in ruins.

Pakistan's president, prime minister and other leaders also had a lucky escape when plans to dine at the hotel on the night of the bombing were changed at the last minute.

But the hotel's owner denied the government had made reservations for that night and Pakistani Senator Javed Ashraf Qazi said he was invited to the dinner but it was always scheduled to be at the prime minister's office.

Meanwhile, Al-Arabiya TV reported Monday that it received a claim of responsibility for the attack by a previously unknown group called "The Fedayeen of Islam," but noted that it could not authenticate the audio recording or the name of the group.

No arrests have been made in connection with the attack. But Malik said suspicion was falling on militants in Pakistan's tribal regions.

"I am not in a position to tell you who has done it, but (in) all the previous investigations, all the roads have gone to South Waziristan," he said.

The blast occurred about 7:50 p.m., after the breaking of the fast during the holy month of Ramadan.

Pakistani authorities released security video of the blast, showing a small explosion inside the truck before the larger, deadly explosion.