Japan may withdraw military from Iraq

(CNN) -- Japan may withdraw the last of its military mission in Iraq by the end of the year, the Ministry of Foreign Affairs said Thursday. 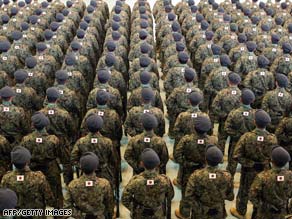 Japan's Ground Self-Defense Force was initially deployed in 2004 to help in reconstruction and left in 2006.

Japan's Air Self-Defense Force has been airlifting materials and troops between Kuwait and Iraq since 2006 to support U.S.-led coalition forces.

"The political and security situations have improved," and the Iraqi government suggested it wants countries to downsize their presence, Defense Minister Yoshimasa Hayashi told reporters, according to the Kyodo news agency.

Foreign Minister Masahiko Komura said Japan will discuss an official schedule for ending the mission with the United States, the United Nations and Iraq.

Withdrawal would mark the end of Japan's military presence in Iraq. The country's Ground Self-Defense Force was initially deployed in 2004 to help in reconstruction and left in 2006.

The Japanese Navy continues to take part in refueling missions in support of the U.S.-led coalition in and around Afghanistan. Except for a three-month hiatus, Japan had been refueling coalition warships taking part in interdiction operations against terrorists in the Indian Ocean since 2001.

As an officially pacifist nation since losing World War II, Japan's participation in these missions has been controversial.

All About Afghanistan War • Iraq War