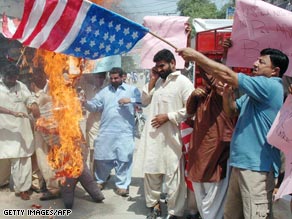 Pakistanis in Multan protest what they say was a U.S. attack using Predator drones.

Pakistan's "territorial integrity ... will be defended at all cost and no external force is allowed to conduct operations ... inside Pakistan," according to a military statement attributed to Chief of Army Staff Gen. Parvez Kayani, who succeeded Pervez Musharraf after he stepped down as Pakistan's army chief last year.

The announcement came as Pakistan's military resumed its battle against Taliban militants in its tribal region, two army spokesmen said. More than 20 militants and four security forces were killed in Monday's fighting in Bajaur Agency, they said.

The anti-Taliban operation was initiated August 6 but was suspended September 1 for the Muslim holy month of Ramadan, with the exception that security forces would respond if attacked.

A ground incursion last week by U.S. forces into Pakistan strained relations between the two countries. Pakistan summoned the U.S. ambassador in Islamabad to complain about the incident, which it said killed 15 civilians.

The Pentagon has not confirmed the raid, but a senior U.S. official who declined to be named told CNN's Barbara Starr that U.S. helicopters dropped troops into the village of Angoor Adda in South Waziristan, which borders Afghanistan. The official said there was no evidence of any civilian deaths.

The U.S. official said the operation was launched fairly quickly without formal permission from Pakistan's government after it became clear that there was sufficient intelligence to take the risk of putting U.S. troops on the ground in a potentially hostile area of Pakistan.

In the U.S., the chairman of the Joint Chiefs of Staff, Admiral Michael Mullen, warned Congress on Wednesday that cross-border attacks into Afghanistan by militants in Pakistan's tribal region are a problem and said the U.S. has deployed Predator drones to attack targets in Pakistan.

Mullen said Afghanistan can't be referenced without "speaking of Pakistan," where, he said, the militant groups collaborate and communicate better, launch more sophisticated attacks, employ foreign fighters and use civilians as human shields.

"In my view, these two nations are inextricably linked in a common insurgency that crosses the border between them," he said.

He added that the U.S. is "running out of time" to win the war in Afghanistan and that sending in more troops will not guarantee victory.

On Tuesday, President Bush announced the deployment of 4,500 additional troops in Afghanistan.