COLOMBO, Sri Lanka (CNN) -- Sri Lanka's military said Tuesday it shot down a plane used by the Tamil Tiger rebels, a small victory for the government in the country's ongoing civil war. 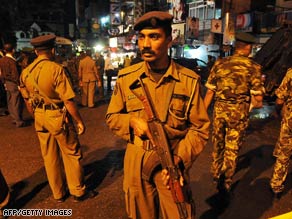 Police cordon off a street in Colombo on Monday following an explosion that injured at least 10.

However, the Tamil Tigers disputed the claim, saying its aircraft safely returned home.

The single-engine, four-seater plane was gunned down as the rebels attacked a military base in Vavuniya, the northernmost town under government control, an Air Force official said.

The Sri Lankan government said authorities found the bodies of 10 rebel fighters, but the number of casualties from the plane was not immediately known.

In the past, both sides have exaggerated accounts of military operations.

Also on Tuesday, the government asked United Nations agencies and non-governmental organizations to leave parts of the northern Wanni region; security sources told CNN the order was a prelude to a government bombing campaign of rebel positions there.

The fighting in Sri Lanka pits government forces in a country dominated by the Sinhalese ethnic group against rebels from the Tamil minority.

The rebels, formally known as the Liberation Tigers of Tamil Eelam (LTTE), are fighting for the creation of an independent nation, citing discrimination by the Sinhalese.

More than 70,000 people have been killed in the conflict, according to AP reports.

All About Sri Lanka • War and Conflict