(CNN) -- Citing "emerging evidence," the top U.S. military commander in Afghanistan asked for an investigation into reports that more than 90 Afghan civilians died in a recent U.S. military operation in western Afghanistan. 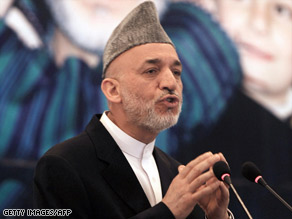 Gen. David McKiernan did not specify what new evidence had emerged in the the August 22 counter-insurgency operation, which took place in the Shindand District in the Herat province.

"I feel it is prudent to request that U.S. Central Command send a general officer to review the U.S. investigation and its findings with respect to this new evidence," said McKiernan, who is commander of NATO's International Security Assistance Forces.

"The people of Afghanistan have our commitment to get to the truth," he said.

Afghanistan's government and the U.N. Assistance Mission in Afghanistan believe 90 civilians -- 60 children, 15 women and 15 men -- were killed in the August 22 airstrike.

Their findings conflicted with the initial investigation by the U.S.-led coalition in Afghanistan, which said that 30 to 35 Taliban militants and five to seven civilians were killed.

Investigators discovered "firm evidence" that the militants had planned to attack a nearby coalition base, the coalition statement said, and the airstrike disrupted that plan.

The coalition investigation said U.S. and Afghan forces came under fire from Taliban militants as the forces approached the target in the early hours of August 22.

"The intensity of the enemy fire justified use of well-aimed small-arms fire and close-air support to defend the combined force," the coalition said in a statement released shortly after the strike. "The type and application of fires were used in accordance with existing rules of engagement."

The investigation found evidence that Mullah Sadiq, a known Taliban commander, was among the militants who were killed, the coalition said.

Nonetheless, after the Afghan government concluded its investigation, Afghan ministers demanded a review of international troops within its borders.

Afghanistan's Council of Ministers called on the Ministries of Defense and Foreign Affairs to start negotiating a "status of forces" agreement with international forces, which include U.S. and NATO troops. The council also asked that the ministries demand international forces halt airstrikes on civilian targets, home searches not coordinated with Afghan authorities, and illegal detention of civilians.

Karzai blamed U.S.-led coalition forces for failing to coordinate their attack with the Afghan army. But the coalition said the airstrike was called in by Afghan and coalition troops as they embarked on a raid to arrest a Taliban commander in Shindand.

A U.S. military official, who declined to be named citing the ongoing investigation, previously cast doubt on initial reports that the strike killed dozens of civilians who had gathered in a room and were reciting Koranic verses at 1 a.m. Regarding reports that most of the alleged 90 killed were children, the official said there were not even 50 children in the entire village.

He said the airstrike was on a legitimate target, noting coalition forces found a weapons cache at the site -- including AK-47s, 4,000 rounds of ammunition, and bomb-making materials -- as well as thousands of dollars in U.S. currency.

The investigating officer interviewed more than 30 people -- both Afghans and Americans, the statement said. He also viewed video taken during the engagement, topographic photos of the area before and after, reports from ground and air personnel involved, reports from local medical clinics and hospitals, intelligence reports, and physical data and photographs collected on the site.

Last week, Afghan President Hamid Karzai spoke to U.S. President George Bush "in general terms" about the incident, the White House said in a statement. It gave no further details.

All About Afghanistan War • Hamid Karzai • The Taliban