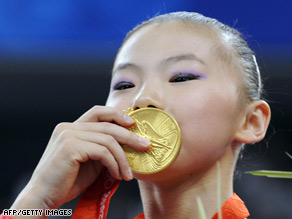 The committee asked the International Gymnastics Federation to clarify the situation, said spokeswoman Giselle Davis. She said she wouldn't call it a formal investigation.

Yet commentators, bloggers and others have raised questions about whether about half the members of China's team were old enough to compete -- athletes must be at least 16 in the year the games take place.

In women's gymnastics, younger teenage girls can have an advantage over older competitors due to their often smaller, more agile bodies and lighter frames.

"We have asked the gymnastics federation to look into what have been a number questions and apparent discrepancies on this case," Davis said.

A top Chinese Olympic official said questions regarding the ages of the athletes have been dealt with previously.

"The eligibility of the athletes has already been investigated and authorized by the international federation and, if they hadn't been cleared, they wouldn't have participated in the games," said Wang Wei, executive vice president of the Beijing Olympic Committee.

Chinese officials provided the Olympic committee with passports, showing that team members were of legal age, but numerous challenges have been made.

The latest came from a blogger known as "Stryde Hax." The blogger claims to have uncovered proof that Chinese gymnast He Kexin is only 14.

In Internet searches, "Stryde Hax" allegedly uncovered Web pages showing lists complied by China's General Administration of Sport that show a 1994 date of birth for He. That would make her 14 -- too young to compete in the Olympic Games.

CNN has not been able to independently verify the information, but snapshots of the Web pages appear to back up the claim. Other bloggers have joined the search and reported similar results.

The New York Times conducted its own investigation, producing similar results that seem to implicate He and two other members of the team. The Times uncovered a 2006 biography on He that lists her birthday as January 1, 1994.

"According to online sports registration lists in China, half the team - He Kexin, Yang Yilin, Jiang Yuyuan - would be under age," the Times reported in July.

The International Gymnastics Federation, however, has said that those gymnasts were eligible and that the ages on their passports were correct.

"Our athletes participating in these games all conform to the age regulations of the Olympics," said Huang Yubin, head coach of the men's and women's teams.

"Asians have different figures than people from the West, so that's what caused their suspicion," Huang said, referring to media inquiries. "They shouldn't be suspicious."