(CNN) -- The resignation of Pakistan's Pervez Musharraf has been accepted with immediate effect by national lawmakers, a Pakistan official said. 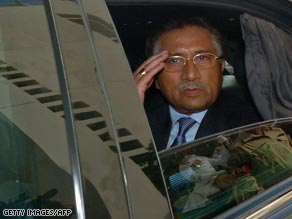 Musharraf salutes as he is driven away Monday having announced his resignation.

The National Assembly formally accepted Musharraf's resignation hours after a televised address Monday announcing that he would step down.

The chairman of the upper house of the assembly, Mohammedmian Soomro, will serve as acting president until a successor is chosen.

Under Pakistan's constitution, the president is elected by a majority vote of Pakistan's four provincial assemblies and the two houses of the National Assembly.

Musharraf swept to power in 1999 in a bloodless coup.

He had come under increasing pressure in recent weeks to quit, with the ruling coalition taking steps to impeach him.

"I don't want the people of Pakistan to slide deeper and deeper into uncertainty," Musharraf said in his televised address.

"For the interest of the nation, I have decided to resign as president," he said. "I am not asking for anything. I will let the people of Pakistan decide my future."

Local media reports said he had been granted "safe passage" out of the country.

Musharraf has been a keen ally of the West in the fight on terror, receiving billions in military aid from the U.S. and launching attacks on militant groups near the country's border with Afghanistan.

In a statement released by U.S. National Security Council spokesman Gordon Johndroe, U.S. President George W. Bush said it was committed to a "strong Pakistan that continues its efforts to strengthen democracy and fight terror."

"President Bush appreciates President Musharraf's efforts in the democratic transition of Pakistan as well as his commitment to fighting al Qaeda and extremist groups," the statement said.

U.S. Secretary of State Condoleezza Rice said he had been a "friend to the United States" and one of the "most committed partners in the war against terrorism and extremism."

"We will continue to work with the Pakistani government and political leaders and urge them to redouble their focus on Pakistan's future and its most urgent needs -- including stemming the growth of extremism, addressing food and energy shortages and improving economic stability," she added.

"The United States will help with these efforts to see Pakistan reach its goal of becoming a stable, prosperous, democratic, modern, Muslim nation."

A senior State Department official familiar with the situation told CNN that U.S. officials were in touch with Musharraf in the week leading up to the resignation. However, the official said, the U.S. made it clear it would not get involved in the struggle between Musharraf and the newly elected Pakistani parliament.

"If he made a decision to go, or fight against it -- we didn't advise him either way," the official said. "We really did keep our fingers out of this one."

He praised Musharraf's economic and security achievements, described Pakistan as a "vital friend" and said Britain's aid program for the country would continue, The Associated Press reported.

Until now, Musharraf, 65, had resisted pressure to resign. But his power had eroded since parties opposed to his rule swept to victory in February's parliamentary elections.

Musharraf spent a large part of his speech delivering a state-of-the-union style list of Pakistan's "accomplishments" under his rule. He contrasted it with what he called the deteriorating economic situation now.

"After the elections, the nation wanted solutions from the new government," he said. "But the politicians could not do so. A personal vendetta was started."

View a timeline of Musharraf's time in power »

A coalition committee spent last week compiling a list of charges against Musharraf including corruption, economic mismanagement and violating the constitution. Parliament was expected to consider an impeachment motion Monday or Tuesday.

"I am confident that not a single charge can stand against me," Musharraf said. "I have not done anything for my personal gain. Whatever I have done, I have done it for Pakistan."

Faisal Kapadia, a commodities trader in Karachi who runs a blog about Pakistan called Deadpan Thoughts, said Musharraf's decision would get a mixed reaction.

"Leading Pakistan is not an easy task, and anyone doing it comes under a lot of criticism," he said.

"In the start, most Pakistanis were for him. And he still has some supporters -- especially because the new government, which promised to do things differently, has failed to do much in the past 100 days in power."

Musharraf grabbed power in 1999. He was serving as military chief when then-Prime Minister Nawaz Sharif dismissed him, setting off a confrontation.

As Musharraf was returning from an overseas visit in October 1999, Sharif refused to allow the commercial airliner with 200 passengers on board to land.

Within hours the army had deposed Sharif in a bloodless coup, and the plane was allowed to touch down with only 10 minutes of fuel left.

Musharraf was welcomed by a nation on the brink of economic ruin.

"I think at this point, his intentions were good," said Lt. Gen. Talat Masood, a political analyst. "He wanted to serve the country and to be different."

During his rule, Pakistan attained respectable growth rates and established a generally favorable investment climate. Along with that came a growing middle class, a more aggressive media, and a more assertive judiciary.

"He brought parliamentary reforms. He brought women into the parliament," said Ahmed Bilal Mehboob, director of the Pakistan Institute of Legislative Development and Transparency.

But, analysts say, Musharraf never lost his military mindset. "He in a way, always believed in a unity of command, a very centralized command, which means his command, in fact," said Masood.

After the September 11, 2001, terrorist attacks in the United States, Musharraf found himself on the frontline of the 'war on terror.'

Pakistan had long supported the Taliban as they battled for control of Afghanistan in 1990s, in the aftermath of the Soviet pull out.

But after the 2001 attacks, Musharraf aligned himself with the U.S. to help rout the fundamentalist Islamic movement.

Washington gave Musharraf billions in aid as he vowed to deprive the militants of the sanctuary they had established along the country's border with Afghanistan.

The move triggered protests and accusations that he was trying to influence the court's ruling on whether he could run for another five-year term. Chaudhry was reinstated but the damage was done.

In October, Musharraf was re-elected president by a parliament critics said was stacked with his supporters. Opposition parties filed a challenge.

The next month, he declared a state of emergency, suspended Pakistan's constitution, replaced the chief judge again and blacked out independent TV outlets.

Under pressure from the West, he later lifted the emergency and promised elections in January.

He allowed Sharif, the prime minister he deposed, to return from exile. He also let in another political foe, Benazir Bhutto. She, too, had been a prime minister, and led the Pakistan People's Party.

However, in December, the country was plunged into further turmoil when Bhutto was killed at a rally in Rawalpindi.