1,200 Marines get tour extension in Afghanistan

(CNN) -- Approximately 1,200 Marines serving in southwestern Afghanistan will have their tours of duty extended by 30 days, Pentagon and Marine officials said. 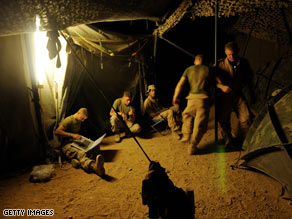 The Marines, most coming from the Marine Corps Air Ground Combat Center at Twentynine Palms, California, will come home at the end of November instead of the beginning of that month, the officials said.

The Marines have been serving in Farah province as trainers for the Afghan army. They have been repeatedly attacked by insurgents and have been seeking additional firepower.

Earlier this summer, the Pentagon approved plans to extend the tours of about 2,000 Marines serving in combat roles in Afghanistan's Helmand province.

U.S. military commanders say that until more troops are freed up from Iraq, such minor extensions are the only steps they can take to bolster their combat capability in Afghanistan.

All About Afghanistan • U.S. Marine Corps